Tonight is the first episode in a six-part miniseries about David Koresh and the Branch Davidians, called Waco. It’s airing on the Paramount network (formerly Spike TV). Michael Shannon and Taylor Kitsch are costarring in this retelling of deadly 1993 Waco, Texas siege that is still the subject of theories and rumors to this day. The series tries to delve into the history of Koresh and what ultimately led to the deadly standoff. Tonight’s premiere is called “Visions and Omens.” Read on below for more details about how to watch every episode in the series, what time the episodes will air, and what channel you can find them on.

The first episode in the Waco miniseries, Visions and Omens, airs tonight at 10 p.m. Eastern (9 p.m. Central.) An encore of the same episode will then repeat immediately after it. Each episode will air at 10 p.m. Eastern on Wednesday night every week for six weeks. The episodes are airing on the Paramount Network (formerly Spike TV.) However, tonight’s episode is also airing on CMT simultaneously. To find what channel Paramount or CMT is on for you, click here to go to TV Guide’s listings. Then change the “Provider” (right under TV Listings) to your local provider. You’ll be able to scroll down to see what channel Paramount or CMT is on in your region. If your cable or satellite company carried Spike TV, then it will likely still be carrying the Paramount Network.

Waco retells the tragic 51-day shootout and raid on the Branch Davidian compound in Waco, Texas. Eighty-two followers and four federal agents died. John Erick and Drew Dowdle, creators of Waco, drew their script from sources like FBI negotiator Gary Noesner’s Stalling for Time, and the book by Branch Davidian survivor David Thibodeau, A Place Called Waco. Taylor Kitsch plays Koresh and the series focuses on him and his followers. The series also tells the stories of some of his individual followers, giving us a better idea of just what happened at the compound. And Michael Shannon plays Gary Noesner, who wanted peaceful negotiations — a request that wasn’t very popular at the time.

The series begins on February 28, 1993, the date that the 51-day siege of the Branch Davidian compound began. But then we go back in time and learn more about David Koresh and his past and the origins of the Mount Carmel Center. We meet followers David Thibodeau, Rachel, Michelle, Judy, and Steve Schneider.

This is Paramount’s first original series now that it’s no longer known as Spike TV. Twenty-five years later, it’s a story that still needs to be told and shouldn’t be forgotten. See a preview of Waco below: 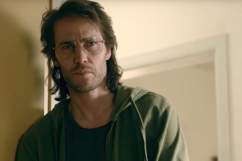