Frozen in Love was part of Hallmark’s 2018 Winterfest lineup. The movie takes place in Denver, where a Denver small bookstore owner has to save her store from closing by helping the PR nightmare of a local professional hockey player. But is the movie really filmed in Denver? Were the Denver Royals really involved? Unfortunately, Frozen in Love was not actually filmed in Denver. But you can still visit where the movie was filmed (including the resort), and if you really like professional hockey, you can watch the Denver Royals (even if they weren’t actually part of the filming.)

Frozen in Love was not filmed in Denver. The movie was actually filmed in British Columbia, Canada, including Revelstoke Mountain Resort. So you can’t relive moments of the movie in Colorado, but you certainly can if you decide to visit Canada. British Columbia is a popular place for Hallmark movies. Many Christmas movies were filmed there, including The Mistletoe Inn, A Gift to remember, The Christmas Train, A Royal New Year’s Eve, Christmas Homecoming, A Joyous Christmas, Coming Home for Christmas, and more. BC is such a popular location for Hallmark Christmas films that What’sFilming referred to it in August as being in “a perpetual state of Christmas.” Revelstoke Mountain Resort is located in Revelstoke, BC, on Mount Mackenzie.

Frozen in Love was filmed December 2 through December 8. Revelstoke Mountain Resort, where much of the movie was filmed, was also where Hallmark’s Marry Me at Christmas was filmed. Downtown Revelstoke was a big part of the filming of Frozen in Love, a local newspaper reported. In fact, despite being filmed in December, crews still had to lay some cotton down on the sidewalks to imitate snow, the Revelstoke Review reported. Filming locations in Revelstoke included: Grizzly Plaza, Grizzly Bear Square, Mackenzie Avenue, the ally behind Everything Revelstoke, Revelstoke Forum, and more.

During filming, one crew member had to shovel imported snow onto Mackenzie Avenue, which amused residents since the town typically gets plenty of snow in December.

One resident, Jean-Marc LaFlamme, commented on Facebook: “Next it will be imported onto (the) mountain?” And resident Marc Joiner Mj wrote, “Are they then taking it out? Or leaving it for the sequel Flirting with Slush?”

And one resident who owned YLW Food Truck decided to briefly leave their hiatus in order to sell coffee while the movie was filming:

Even with a little imported snow, the crew still managed to capture the stunning winter beauty of the area more the movie. Will you be wanting to visit Revelstoke soon? 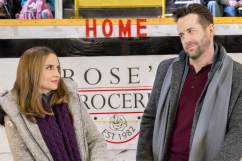 Read More
Hallmark, TV
Learn all about the filming location for Hallmark's Frozen in Love. Was it really filmed in Denver?