Bekah Martinez has had some drama both on and off the show during this season of The Bachelor. Martinez, whose face reminds us of a young Marilyn Monroe, faced criticism over her young age on the show and then became a punchline when word that her mother had reported her to the police as “missing” in recent months got out. On the Women Tell-All episode, Martinez confirmed that the “missing” saga was not a big deal. After the news broke, Martinez joked about it online and she also set the record straight on Jimmy Kimmel Live, according to People. Martinez stated that, “A lot of people thought I lied to my mother saying that I was on a farm when I was actually on The Bachelor but no I had already been eliminated from the show. I just decided to go to the mountains with my friends for a couple weeks and I was there for six or seven days without phone service, which I thought I was going to have phone service and I told my mother that I would … So I got in my car, drove to where I had service, called my parents and then come to find out only 12 hours before my mother had called the Humboldt Sheriff’s Department saying that I was missing.”

According to People, Martinez’s mother had a different story, saying that Martinez was allegedly planning to work on a marijuana farm. Martinez’s mother told deputies she contacted her daughter on a friend’s cell phone on November 12, 2017 around 11 a.m. local time and told her she wanted her to come home, but Martinez refused. Somewhere in the middle of both of those stories is the truth, right? Well, this is one of the subjects that Martinez addresses while in the hot seat on the Women Tell-All episode tonight.

On The Bachelor this season, contestant Tia Booth said that she felt Martinez was not ready for marriage because she was only 22 years old. Luyendyk and Martinez actually had a 14-year age difference, according to Entertainment Tonight. On the Women Tell-All episode, Booth said that there were some things that were said that made her concerned. Martinez speaks up and confronts Booth, saying that she knows nothing about her. Martinez also said that just because she is younger, it doesn’t mean that she doesn’t have experience in love. See the confrontational clip from the episode above.

A very big reveal on the Women Tell-All is that Martinez says she met up with Luyendyk a week after she left the show. Reality Steve reported that, “Bekah M. said she always felt Arie was looking for an out when he was with her, and admitted she had spoken to Arie since filming ended and got the closure she needed and she’s fine.” Martinez also revealed to Entertainment Tonight that, “I just got the opportunity to talk with him a week later at his hotel here in L.A. and it was filmed and everything but it didn’t make the cut. We were just able to talk for 30 or 45 minutes and just kind of hash out our relationship and what happened.”

Martinez continued, saying that, “I was kind of able to call him out and say, ‘I don’t think you gave me a fair shot … I felt like you were looking for a way out ever since you found out how old I was because you were afraid of how strong your feelings were for me.’ I was able to express that, and he responded saying, ‘Yeah I think you’re right. I don’t think I was fair and I shouldn’t have handled it that way. So I think we were both able to get the closure that we needed from that.” When Martinez is in the hot seat on the Women Tell-All show, host Chris Harrison again brings up her age. She said that she’s never experienced this kind of judgment just about “how many years she’s been on Earth.” In the sneak peek video from the Tell-All show, part of Martinez’s hot seat moment is featured, along with some of the other women’s solo time.

Tomorrow night is the overnight dates and next week, the finale will be shown on the ABC network. Tune in to see who Lueyndyk ultimately ends up with on the show. 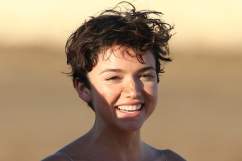 Bekah Martinez Was Recently Reported Missing By Her Mother

Read More
Reality TV, The Bachelor, TV
After Bekah Martinez left The Bachelor, she reportedly met up with Arie Luyendyk. She also had to discuss the missing persons report filed on her.