A sex tape that features Blac Chyna performing oral sex on a mystery man has surfaced on social media after it was apparently leaked online. According to TMZ, Chyna’s ex, Mechie, claims that he’s the male in the x-rated video.

Chyna, whose real name is Angela White, has not said anything about the video. Her attorney has said that legal action will be taken, but refused to comment further.

1. Chyna’s Attorney Told TMZ That the Police Have Been Notified & the Account That Posted the Video Was Suspended

The sex tape video featuring Blac Chyna and an unidentified man is just over one minute long. It’s fairly low quality and very dark, but viewers can see a naked Chyna performing oral sex while laying down.

It looks like the male in the video filmed the oral sex with a cell phone. Chyna doesn’t speak much in the video, but the man that she is with can be heard making comments and telling her what to do to him.

The video ends with Chyna getting up from the bed, the tattoos on her body fully visible. People have been tweeting about the video much of the morning, many slamming Chyna’s “skills” and calling the video “boring.”

Chyna’s ex, Mechie, has come forward to say that he’s the male in the video. A rep for the Vine star told TMZ that Mechie filmed Chyna giving him oral sex using her cell phone. To his understanding, there was only one copy of the video (on Chyna’s phone), so he is unsure how it leaked.

Chyna hasn’t responded to the video leak. She hasn’t posted anything on social media since the weekend. Her attorney, Walter Mosley, told TMZ that this is a “criminal matter” and that they were contacting the police over the leak.

The account that posted the sex tape on Twitter “blaccynasexta1” has been suspended. Several other people have saved the video, however, and it is still being viewed on social media. 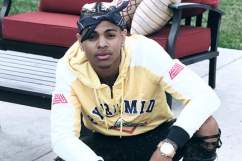 This isn’t the first sex tape that Chyna has made, either. In 2016, TMZ reported that Chyna and her ex, Tyga, had a sex tape that got into the wrong hands and that someone had been shopping it.

“You may be surprised, but Blac Chyna does not want this tape to come out. She is fighting it tooth and nail. She actually has an attorney that says that they will go after anybody who tries to distribute, view, sell this tape, or anything like that,” TMZ reported at the time.

The tape was never released to the public. People have, however, been wondering if the tape that is circulating online now could be the same tape, but it seems as though people are accepting that it’s Mechie, not Tyga, in this particular video.

Tyga was also rumored to have a sex tape with his ex, Kylie Jenner.

Seven months ago, Chyna made headlines after her ex-boyfriend, Rob Kardashian, posted naked photos of her on his Instagram account. At the time, Kardashian claimed that Chyna had sent him photos of herself making out with another guy.

The video showed Chyna laying on top of former Vine star Mechie. Chyna could be seen kissing Mechie while staring into the camera.

Clearly upset, Kardashian decided to expose his ex, sharing not only the video, but also sharing some very private pictures of her with the world. A short while later, Instagram shut down Kardashian’s account.

“This is from Chyna yesterday to me. I never been so disrespected in my life. I just bought her 250K of jewelry yesterday. This woman is so disrespectful and I don’t care,” Kardashian captioned a photo, which was a screenshot from his phone. The screenshot included apparent sexting and a picture of a woman (that he claims is Chyna) with her dress lifted up.

Kardashian went on to post several additional nude photos of Chyna, slamming his ex and calling her a cheater.

“The unwritten rule no one told Ms. White when she embarked on a relationship with Mr. Kardashian is: the entire family takes it personally if you leave and will come after you, using their fame, wealth and power to take you down. They will get your television show canceled. They will go after your endorsement deals. They will condone slut-shaming of you. They will spread lies about you. They will claim you are a bad mother, without evidence,” the original lawsuit, filed by Chyna’s lawyer, Lisa Bloom, claimed.

Blac Chyna is a mother of two young children. Her son, King Ciaro, is 5 (the child’s father is Tyga), and her daughter, Dream (her dad is Rob Kardashian), turned 1 in November.

Chyna often shares photos and videos of her children online. She splits custody of her kids with both of her ex-boyfriends.

According to the website Who’s Dated Who, Blac Chyna is currently single. Since that whole fiasco with Kardashian, she has been linked to Mechie and to Rarri True. It has also been reported that she dated Demetrius Harris and, most recently, rapper Playboi Carti.

5. Chyna Has Posed Nude in the Past

Blac Chyna to Bella Hadid, the 10 most popular PAPER stories from 2016. https://t.co/Fy4m4x3Rgq pic.twitter.com/Wzm7kZnjjF

In September 2016, Chyna was featured on the cover of Paper Magazine. At the time, she was pregnant with Kardashian’s baby. She posed nude for the outlet, her top half covered by her long, blonde hair, as she cradled her baby bump.

Chyna has never been shy when it comes to showing off her body. In fact, about a year ago, she posted a series of naked photos of herself to Instagram, in honor of Black History Month.

“In celebration of Black History Month, I wanted to push out my inner Queen, express my ethnicity and beauty unapologetically,” Chyna told People Magazine at the time.