With Black Panther being a Ryan Coogler film, it wasn’t all that surprising when Michael B. Jordan was added to the cast. The two had already teamed up for two movies (Fruitvale Station, Creed) and they already have another one (Wrong Answer) waiting in the wings. However, what was somewhat surprising was the role Jordan would be playing in Black Panther. He’d be playing the film’s villain, Erik Killmonger.

Assuming the role of Killmonger will be Jordan’s first time really playing the villain role. In The Wire, he was a sentimental favorite, and in Friday Night Lights he was the down on his luck, but insanely talented quarterback we all wanted to see succeed. He was the victim of a police shooting in Fruitvale Station, an up and coming boxer in Creed and one of the Fantastic Four in Fantastic Four. The general consensus of Jordan if you ask around is a resounding oh, I love that guy.

The desire to play against type was one of the reasons why Jordan decided to take the role of Killmonger.

“I think it’s a different muscle for me,” Jordan said. “I wanted to step outside of my comfort zone and try something different, especially with [Director] Ryan [Coogler], working with him again. I jumped at the chance to get a chance to work with him again.”

Well now he’s going up against the Black Panther, so we’ll see how strongly people stand behind him now.

But who is Erik Killmonger?

Killmonger’s real name is N’Jadaka and he is a native of Wakanda, the fictional country that is ruled by the family of T’Challa, also known as the Black Panther. N’Jadaka’s life changed when he and his family were exiled by T’Chaka, T’Challa’s father, for helping outside forces try to invade Wakanda.

N’Jadaka eventually ended up in America, where he changed his name to Erik Stevens and fueled by the feeling of betrayal and hatred for Wakanda, joined the U.S. military. Stevens became an elite fighter and warrior and soon changed his name again, this time to Erik Killmonger, a nod to his penchant for basically having become a killing machine.

Killmonger starts to harness his desire for revenge and puts together a plan to not only return to Wakanda, but steal the throne from T’Challa. In an interview, Jordan said that he believes that Killmonger is ultimately driven by resentment, as opposed to a desire to take over.

“I feel like it’s more of resentment,” Jordan said. “I feel like there’s more of a jealousy aspect. It’s always interesting to train for an enemy you’ve never met before, so it’s a lot of studying him from afar, and I feel like he’s very patient. He’s a thinker. He’s really good at chess, and he was waiting for his perfect time to pop up.”

In Black Panther, Killmonger teams up with Ulysses Klaue (Andy Serkis,) who is a Dutch/South African scientist who has a history of trying to steal vibranium, the material that among other things, is what Captain America’s shield is made of and that Wakanda possesses a great deal of, from Wakanda. 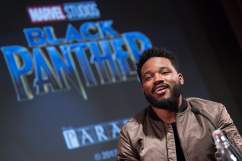