Britney Spears will be appearing on television during Super Bowl LII on February 4, after all. While rumors that she will be taking the stage with Justin Timberlake during the halftime show have been swirling for weeks, it looks like Spears is going to be a part of Sunday’s festivities in a different way.

On Thursday, February 1, Spears took to Instagram to share a clip from an upcoming Pepsi commercial in which she makes a guest appearance of sorts. Spears’ original Pepsi commercial — from 2001 — is featured briefly during the 2018 commercial, bringing back some serious nostalgia.

In the new commercial, Spears’ 2001 Pepsi ad comes on the television in a diner. One of the diner workers looks up at the screen and appears captivated by Spears (or, perhaps, by the soft drink). It’s a total throwback to Spears’ original commercial in which a man working in a diner is seen staring at a television with his mouth hanging open, watching Spears pop open her can of soda while the kitchen behind him bursts into flames.

You can check out the clip below (note: the commercial on the screen is actually from Spears’ 2000 commercial, while the scene is a throwback to her “Joy of Pepsi” commercial which was released the year prior).

Some things are just timeless ? Thank you for letting me be apart of your story @Pepsi! Watch the #SBLII commercial now! *link in bio*

You can watch Spears’ “Joy of Pepsi” commercial below.

As for the rumors that Spears will be joining her ex-boyfriend on stage during the 2018 Super Bowl halftime show, there has not been any indication suggesting that this will actually happen.

Fans have been talking about a Britney and Justin collaboration for years, but the two haven’t gotten together to work things out, despite both parties saying that they’d be interested. Since Justin and Britney previously appeared at the Super Bowl together (back in 2004 with Aerosmith, NSYNC, Nelly, and Mary J. Blige), many fans have been hoping for a “repeat.” That performance was definitely one to remember.

“The NFL should have ended Super Bowls immediately after this performance, because what’s the point anymore? It will never get any better than this,” suggested E! News in 2016.

But could Justin Timberlake’s performance be better?

While it seems obvious that Timberlake will have some surprise guests during his halftime performance, there has not been any word yet on who those guests might be. At Super Bowl 50, Coldplay performed with Beyonce and Bruno Mars, and for the Super Bowl XLIX halftime show, Katy Perry had special guests Lenny Kravitz and Missy Elliot. Many are wondering who Timberlake will enlist for Super Bowl LII — and many hope that it’s Spears.

The pop star recently finished up her Las Vegas residency at Planet Hollywood and will head out on a multi-city tour over the summer. In 2019, Spears will be heading back to Vegas, where she will have a new show for her residency at the Monte Carlo.

“The schedule was perfect for her and her kids, so why not continue? They made the offer and she just couldn’t refuse. She loves Vegas,” a source told Us Weekly last month.

Spears has yet to confirm this news herself, however, and details about the new show have not been made available just yet. 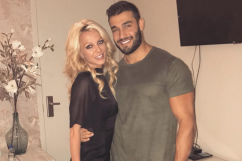