Tonight Hallmark continues its Countdown to Valentine’s series with Cooking with Love, another delightfully romantic movie with a fun, comedic touch. Tonight’s movie premieres at 9 p.m. Eastern (8 p.m. Central) on Sunday, February 11, 2018. The movie stars Hallmark favorites Ali Liebert and Brett Dalton. After you read all about this movie and watch it, come back and share any comments or questions that you may have about the movie in our comments section below. Join in the discussion with other readers.

Here’s the synopsis for the movie from Hallmark: “Optimistic and cheerful TV producer, Kelly, doesn’t have time for love. Bad boy celebrity chef, Stephen, doesn’t have time for anything besides cooking. Fun with a side of love ensues as Kelly and Stephen are paired on a children’s cooking show.” Another synopsis reads: “In the running for a promotion, reality cooking show producer Kelly prepares for her cooking show for kids. When show host Chef Betty has an unexpected injury, Kelly hires controversial Chef Stephen as a replacement.”

Ali Liebert stars as Kelly, a cooking show producer. Liebert was a 2015 Canadian Screen Award winner (Best Actress in a Featured Supporting Role in a Dramatic Series.) She got the award for Betty McRae in Bomb Girls. She’s most recently starred as a detective on Ten Days in the Valley. You may also remember her from appearances that include iZombie, Motive, Fringe, Hellcats, Lost Girl, Dead Like Me, Psych, Mech-X4, Harper’s Island, Intelligence, The Devout, Down River, Foxfire, Year of the Carnivore, and more. She recently starred in Hallmark’s Christmas movie, A Gift to Remember, which might have been one of the best Christmas movies of the season. 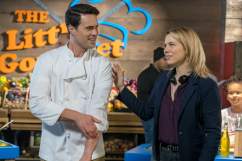 Where Was Hallmark’s ‘Cooking with Love’ Filmed?