Tonight Hallmark airs its last Valentine’s movie with Royal Hearts. Tonight’s movie premieres at 9 p.m. Eastern (8 p.m. Central) on Saturday, February 24, 2018. The movie stars James Brolin, Cindy Busby, and Andrew Cooper. After you read all about this movie and watch it, come back and share any comments or questions that you may have about the movie in our comments section below. Here’s everything you need to know about Royal Hearts.

To find out what channel Hallmark is on for you, click here to go to TV Guide’s listings. Then change the “Provider” (right under TV Listings) to your local provider. You’ll be able to scroll down to see what channel Hallmark is on for you. (To find out how to stream Hallmark’s movies live, see our story here.) If you miss the movie tonight, you can see encore presentations on February 25 at 7 p.m. and March 2 at 8 p.m.

Here’s the synopsis for the movie from Hallmark: “Kelly, a hopeless romantic in Montana eager to finish her dissertation, and her father, Hank, a rancher, receive news that he has inherited an estate from a faraway land. When they travel there, they discover that Hank has not only inherited the estate, but the title that goes along with it – KING!”

James Brolin stars as Hank Pavlik. The Golden Globe and Emmy Award-wining actor brings a lot of star power to this movie. He’s been in many movies and TV shows, but he’s most widely recognized for his roles on Hotel and Marcus Welby MD. His many other credits include Take Her She’s Mine, Catch Me If You Can, Sisters, The 33, Antwone Fisher, The Alibi, Amityville Horror, Westworld, Ted and Venus, Night of the Juggler, The Reagans, Trapped, And the Sea Will Tell, Christmas with Tucker, and more. He’s also directed many movies, including My Brother’s War, which won Best Film at the Hollywood Film Festival. He has raced cars professionally.

Andrew Cooper, a model and actor, stars as Alex. His credits include Damnation (starring as Townsperson), The Way, The Royals (Beck/Lord Twysden Beckwith II), Silent Witness, and Citizen Khan. 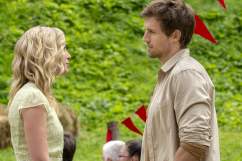 Where Was Hallmark’s ‘Royal Hearts’ Filmed? Is Merania Real?