Tonight Hallmark continues its Valentine’s series with Wedding March 3: Here Comes the Bride, another delightfully romantic movie with a fun, comedic touch. Tonight’s movie premieres at 9 p.m. Eastern (8 p.m. Central) on Saturday, February 17, 2018. It’s the third in Hallmark’s Wedding March series, and fans are absolutely thrilled to see their favorite characters again. After you read all about this movie and watch it, come back and share any comments or questions that you may have about the movie in our comments section below. Join in the discussion with other readers.

To find out what channel Hallmark is on for you, click here to go to TV Guide’s listings. Then change the “Provider” (right under TV Listings) to your local provider. You’ll be able to scroll down to see what channel Hallmark is on for you. (To find out how to stream Hallmark’s movies live, see our story here.) If you miss the movie tonight, you can see encore presentations on Feb. 18 at  7 p.m. Eastern, Feb. 24 at  7 p.m., Feb. 25 at 3 p.m., and March 18 at 9 a.m.

Jack Wagner reprises his role as Mick for the movie. His many credits include When Calls the Heart, Ray Donovan, General Hospital, Melrose Place, The Bold and The Beautiful, Hot in Cleveland, Castle, Monk, and 16 movies of the week for which he was producer on several. Wagner was also featured in Season 14 of Dancing with the Stars.

Josie Bissett stars as Olivia. Her credits include Melrose Place, The Secret Life of the American Teenager, When Calls the Heart, Pregnant at 17, Christmas with Tucker, Paper Angels, The Hogan Family, Law and Order: Special Victims Unit, The Fire Above, Dare to Love, tDeadly Vows, Baby Monitor: Sound of Fear, I Do, They Don’t, Book of Love, and more. She’s also hosted numerous shows. 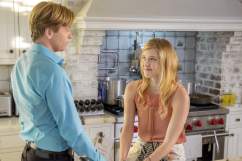 Where Was Hallmark’s ‘Wedding March 3’ Filmed? Can You Get Married There?

Read More
Hallmark, TV, Valentines Day
Learn what time Wedding March 3 is airing, see photos, and learn about the cast. Then join other fans in a discussion.