Dean Unglert was a fan-favorite when he was a contestant on Rachel Lindsay’s season of The Bachelorette and now he may have gotten back into the good graces of Bachelor Nation after striking up a romance with Bachelor Winter Games co-star Lesley Murphy. Fans were previously thrown for a loop on Bachelor in Paradise when Unglert was breaking the hearts of two women at the same time. Now, before we get into all the details on Unglert’s relationship with Murphy, and where the couple stands today, THIS IS YOUR SPOILER WARNING. DO NOT CONTINUE READING IF YOU DON’T WANT TO KNOW ANY SPOILERS ABOUT UNGLERT, MURPHY OR THE SHOW.

Now that we have that out of the way, let’s get to the details. Recently, Murphy revealed to People how she initially got together with Unglert. She revealed that, “We bonded over the fact that both of our moms had breast cancer and his mom unfortunately passed away. He knew about my surgery and my recent double mastectomy. He had the sweetest things to say about it. He was like, ‘I commend you so much for doing that’ … We’re very different people, but that’s attractive in a way … He’s hard to look away from!”

According to E! News, the couple is still together today and they were recently seen together at the Sundance Film Festival in Park City, Utah. A source reported that, “Dean is really happy with Lesley. They are both very goofy and have a lot of fun together.”

Lately, some Bachelor Nation fans have been wondering if the couple got engaged. After promo clips of Unglert down on one knee at the reunion tell-all episodes aired, fans were in a tizzy. Unfortunately for them, Unglert does not propose. He, instead, offers Murphy a key to his house, as reported by Reality Steve. However, there is a real proposal on the reunion special and believe it or not, it’s Clare Crawley who gets engaged. And, in a major twist, it’s to show cast-off Benoit Beauséjour-Savard, who she previously rejected. Apparently the two reconnected after filming and they are in love, according to E! News.

While Unglert and Murphy may have won at love this season, they are not the winners of The Bachelor Winter Games. There is one male and one female winner and they are Ashley Iaconetti and Kevin Wendt. While Bachelor Nation knows Ashley I. as the virgin who cries all the time, Reality Steve has reported that she loses her virginity for the first time to Wendt after the season wrapped. Reality Steve reported that, “They are a “couple” now. Well, as much as someone in this franchise can define “couple” … It’s been reported to me that Kevin’s sole intention of doing this show was to be the next Bachelor: Canada.” Hopefully, for Iaconetti’s sake, Wendt is as into her as Unglert appears to be for Murphy.

Tonight, the finale of the show airs at 8 p.m. ET/PT on the ABC network. The reunion show, aka the tell-all episode, will air immediately following the finale. 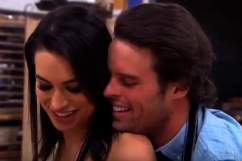 Read More
Reality TV, The Bachelor, TV
What's the latest on couple Dean Unglert and Lesley Murphy? Are they still together? Are they engaged or still just dating?