Jessica Biel is the wife of Justin Timberlake, but many know her by her own successful acting career. Starting out as Mary Camden on 7th Heaven, Biel made a name for herself and soon became a familiar face in film. After the birth of the couple’s son, Silas, who is 2 and a half years old, Biel appeared to take a small break from the screen. But, she returned with a lead role in the television limited series The Sinner, a project she earned a Golden Globe nomination for this year. Biel talked with Entertainment Weekly about finding out she was nominated and she said, “You never think, ‘Oh yeah, my show’s going to get nominated. That’s going to be fun.’ There were so many amazing things and so many great, incredible actors — like, there’s no way! So you kind of go into it with this ‘Who knows?’ attitude, trying not to get so excited in case it doesn’t come through.”

Biel and Timberlake dated for several years prior to getting married, but they took a break from the relationship during the course of their courtship. She Knows previously reported that, “The pair broke off the relationship in fall 2010, amid rumors that Timberlake had cheated on Biel with Olivia Munn and his Friends With Benefits co-star Mila Kunis. Friends of both actresses denied anything happened.”

The couple started dating in January 2007, got engaged in December 2011 and married on October 19, 2012 in Italy at the Borgo Egnazia. They have one child together and the couple previously moved to Montana for a sense of normalcy in their lives.

When Biel was 18 years old, she posed in a very sexy spread for Gear magazine and she reportedly did it in hopes that she would get fired from her sitcom 7th Heaven. The show 7th Heaven had a squeaky clean image and was about a large family whose dad was a reverend. In her photo shoot with Gear, Biel was basically naked and producers of the show were rumored to not be happy about it, so Biel ended up getting taken off the show. She returned for a few random episodes throughout the rest of the series, but she was gone. In her interview with Gear, while she was doing the photo shoot, she said she hoped that her sexy shots would get her fired. Biel stated, “I hope so … I’m leaving, period. I’ll find a way to get killed if I have to.”

Most recently, Jessica Biel appeared as the love interest in her husband’s music video “Man of the Woods”. Check out the video below.

Just before Timberlake’s Super Bowl performance tonight, he was also celebrating his birthday. In a sweet Instagram post, dedicated to her man, Biel wrote, “A picture says a thousand words. And thank goodness because there aren’t enough to express ALL the aspects of my love and respect for you. Here’s to a spectacular year ahead. I’m so proud of all you’ve accomplished and all that is ahead for you. plus you’re a super hot dad. A ninja dad. A kiddie teeth brushing, Jedi sleep mind tricking, intimidating dad voice disciplining SUPER HOT DAD. I love you, you hot dad.. I’m here, right by your side, OG fan girl #1. Happy birthday, my beloved. Now go crush it this weekend at SB LII.”

The holidays are all about giving, but we usually forget ourselves. So why not give yourself a little somethin’ somethin' to jumpstart your goals for the new year? Start with my New Year New You @gaiam picks from @amazon @amazonsports_outdoors (link in bio) 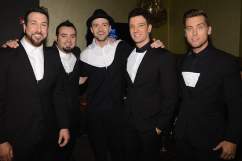