Before we get into all the details on The Bachelor contestant Lauren Burnham, this is your big spoiler warning. If you do NOT want to know who the reported winner is this season, Burnham’s fate on the show or her love life before The Bachelor, STOP READING NOW.

Burnham got her first solo date after a few weeks on the show and she continues to get into Arie Luyendyk’s heart more each episode. Get to know all about Burnham’s love life prior to filming the show, spoilers on the season finale and more below.

According to Reality TV, Burnham dated a professional hockey player named Christopher Crane and their relationship reportedly ended in December 2016. Crane plays for the Toronto Maple Leafs organization and he currently plays for the Orlando Solar Bears.

Burnham is not the winner of The Bachelor this season … in terms of getting proposed to on the show. According to Reality Steve, Arie Luyendyk narrows the competition down to Burnham and Becca Kufrin, but he chooses to propose to Kufrin. Luyendyk has admitted to People that he fell in love with both women on the show and he can be seen professing his love to both in promo videos of the show.

Even though Luyendyk reportedly proposes to Kufrin on the finale, Reality Steve has stated that he ends up calling off the engagement because he had second thoughts. Apparently, Luyendyk realized that he had stronger feelings for Burnham, but he had this epiphany a little late in the game.

Reality Steve reported on January 23, 2018 that, “A couple days after the premiere, I was given word that Arie called Lauren on the night of the premiere … Arie was having second thoughts about Becca and thinking he might’ve made the wrong choice … Arie ended his engagement with Becca a little over a week ago and is now dating Lauren. That’s why he was in Virginia last week at Lauren’s parents house.” Burnham and Luyendyk are reportedly dating but there is no word of an engagement for now. Perhaps things will chance on the After the Final Rose live special.

Locked up. They won't let me out?

According to OKHereIsTheSituation, Burnham was previously engaged to ex-boyfriend Chris Crane. The two were reportedly set to be married in July 2017, but they split. The couple first got engaged in July 2016 and their Crate and Barrel registry is still online, showing at July 8, 2017 wedding date.

But, this wasn’t Burnham’s only engagement. ABC executive Robert Mills told Us Weekly that Burnham has actually been engaged twice and The Hollywood Gossip has reported that Burnham was also engaged to her high school sweetheart at one point.

5. Luyendyk Tells Her “I Love You” On the Show

Luyendyk tells two women on the show that he is in love with them and Burnham is one of those women. During the overnight dates, she reportedly hears it again, as ABC has reported, “Lauren B., who has struggled to find love with Arie, needs more reassurance from him. Preoccupied with thoughts of the other two women vying for Arie’s heart and scared to have her own heart broken, the guarded blond beauty has trouble enjoying the panoramic plane tour of the Nazca Lines. Back on the ground, Lauren B. drops a bombshell. That night, Arie convinces his once skeptical date of his true feelings in an extremely emotional declaration.” 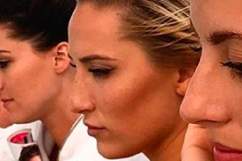