Dean Unglert was a fan-favorite when he was a contestant on Rachel Lindsay’s season of The Bachelorette. Then, fans were thrown for a loop on Bachelor in Paradise when he started dating two women at the same time on the show. Now, Unglert is a contestant on The Bachelor Winter Games and the details of him hitting it off with fellow contestant Lesley Murphy were leaked weeks ago. But, before we get into all the info on their relationship and where the couple stands today, THIS IS YOUR SPOILER WARNING. DO NOT CONTINUE READING IF YOU DON’T WANT TO KNOW ANY SPOILERS ABOUT UNGLERT, MURPHY OR THE SHOW.

According to Reality Steve, Unglert and Murphy bond on the premiere episode of the show and their romance carries out through the end. The big topic of conversation on the premiere episode is reportedly Murphy’s breasts. She tells Unglert that she had a preventative double mastectomy and that no man has seen her breasts since she underwent surgery. After testing positive for the BRCA 2 gene mutation, as reported by People, Murphy decided to rid herself of any potential cancer-causing cells in her body. She said that after her mother tested positive, she and her sisters got tested as well. Murphy explained in an interview with People, why she went ahead with the surgery. She said, “Why hang on to something that is a ticking time bomb? … It was a no hesitation thing.” Months after surgery, Murphy decided to get breast implants.

Recently, Murphy reflected on her mastectomy to People and said that, “Some mornings when I wake up now, my breasts feel foreign. But I’m getting there. And I love them now.” Murphy actually says that she loves her scars and is not going to try to get rid of them, though she is trying to help them heal.

Wearing my scars with a smile today and every day :) Happy to finally reveal my before/after photos on the @embracescartherapy I've been doing for the past few months after my double mastectomy surgery! See more on the blog (link in bio)?

As for Murphy’s connection to Unglert, she revealed to People how they initially got together. She explained, “We bonded over the fact that both of our moms had breast cancer and his mom unfortunately passed away. He knew about my surgery and my recent double mastectomy. He had the sweetest things to say about it. He was like, ‘I commend you so much for doing that’ … We’re very different people, but that’s attractive in a way … He’s hard to look away from!”

According to E! News, the couple is still together today and they were recently seen together at the Sundance Film Festival in Park City, Utah. According to a source, “Dean is really happy with Lesley. They are both very goofy and have a lot of fun together.”

While Unglert and Murphy may have won at love this season, they are not the winners of The Bachelor Winter Games. There is one male and one female winner and they are Ashley Iaconetti and Kevin Wendt. While Bachelor Nation knows Ashley I. as the crying virgin, on this show, Reality Steve has reported that she gives it up for the first time and Wendt is the lucky man. Reality Steve reported that, “They are a “couple” now. Well, as much as someone in this franchise can define “couple” … It’s been reported to me that Kevin’s sole intention of doing this show was to be the next “Bachelor: Canada.” Hopefully, for Iaconetti’s sake, Wendt is as into her as Unglert appears to be for Murphy. 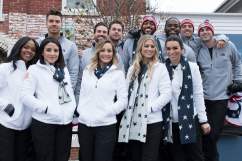 Read More
Reality TV, The Bachelor, TV
Lesley Murphy and Dean Unglert started dating on The Bachelor Winter Games, but are they still together? Is Murphy Unglert's girlfriend? What's the deal?