Before we get started, let’s get this spoiler warning out there right away. If you do NOT want to know about spoilers about Luke Pell, Nastassia Yaramchuk, or The Bachelor Winter Games, STOP READING NOW.

Luke Pell was a fan-favorite on The Bachelorette and there were rumors he was going to be the next Bachelor, but Nick Viall ended up with the starring role. Previously, Pell revealed to Us Weekly that he actually had packed his bags for the gig and was set to fly out to Los Angeles, California when he was alerted that the part was given to Viall instead. At the time, Pell revealed, “We were all satisfied, had agreed to the contracts and everything was moving forward. I was checked in to my flight to come to L.A. I got a call from producers Sunday night at about 10 p.m. They said ABC had decided to quote-unquote go in a different direction … I’ve come to accept the decision, from all my years in the military, I’ve learned that some things are out of my control.”

On The Bachelor Winter Games, Pell came aboard “in search of love”. Pell ends up with the Swedish contestant Nastassia Yaramchuk on the show this season, but are they in it for the long haul? We can help you with that answer. “No.” Though the two seem to have a connection on the show, Bachelor guru Reality Steve insists Pell is just in it for the cameras.

According to Reality Steve, there is some major drama between Yaramchuk and Pell on the tell-all reunion episode after the finale of The Bachelor Winter Games. Reality Steve revealed that during the tell-all show, “Stassi was brought out next by herself. She said Luke ghosted her after taping … Probably because he was seeing Holly Allen right before he left and has been with her since he got back. But yeah, he’s a real stand up guy. They brought out Luke to talk to her and he said he thought she knew by their last conversation he was ending things, but she had no idea.” Steve continued, saying that Pell, “says that he messaged her 3 times on Instagram but she never responded but never got her number. Stassi was apparently not very happy after their interview. Stassi might be my new favorite person, and yet again, Luke shows his true colors.” Yikes.

So, who is Holly Allen? According to her Instagram account, she is a Miss Wyoming 2012. See a photo of her below.

According to The Elite Daily, Pell and Allen may have actually known each other before he was ever even on The Bachelorette. So, was Pell dating her before The Bachelor Winter Games? Whatever the case, the two are reportedly together now.

Tune in tonight on the ABC network at 8 p.m. ET/PT for the finale episode of The Bachelor Winter Games. Immediately following will be the reunion tell-all episode. 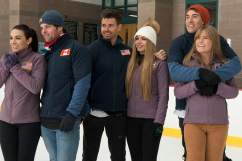 Read More
Reality TV, The Bachelor, TV
What happened with Luke Pell and Nastassia Yaramchuk on The Bachelor Winter Games and what's this we hear about him dating new girlfriend Holly Allen?