Natasha Wagner – who also goes by the name Natasha Gregson Wagner – is one of the two daughters of Hollywood legend Natalie Wood.

Although she bears the name of Natalie’s husband, Robert Wagner, Natasha is not his biological daughter. She is the daughter of Richard Gregson, who was briefly married to Wood. Robert Wagner and Natalie Wood did have one daughter together, Courtney Wagner. Natasha was 11, and Courtney was 7 when Natalie drowned after a night on a yacht with Robert Wagner and the Hollywood actor, Christopher Walken.

Wood’s mysterious death – which was initially ruled an accident – is gaining renewed scrutiny after an investigator dubbed the television star, Robert Wagner, a “person of interest.”

Natasha Wagner “was surrounded by Hollywood glamour from the onset as the daughter of film star Natalie Wood and British producer/writer/agent Richard Gregson, who was married to Wood from 1969-1972,” reports IMDB. Natasha Gregson, now Natasha Gregson Wagner, was born on September 29, 1970, in Los Angeles.

Natasha would alternate living with Robert Wagner and Richard Gregson while growing up, and she called both men dad. “I think my Dad and Daddy Gregson, they were trying to pick up the pieces for us and stumble forward and find out what our life looked like after that,” she told People Magazine. “I was so lucky I had two dads who were deeply committed to raising me and helping me through.”

Natasha Gregson Wagner Remembers Her Mom, Natalie WoodWagner talks to Jesse Palmer about the many questions surrounding her mother's death and reveals how she's honoring the late actress' legacy.2016-05-05T14:03:14Z 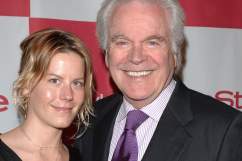 2. Natasha Created a Perfume Line in Her Mother’s Name & Remembers How Natalie Smelled of Gardenias

Natasha spoke at length about her mother to The New York Times in 2016. She told the newspaper that the smell of gardenias reminds her of her mother most, so she plants a gardenia bush at all of her homes. At the time of the article, she was living in Venice, California.

Reflections: Natasha Gregson WagnerNatasha talks about the scent of gardenia, how it evokes memories of Natalie Wood, her beloved mom, and how it inspired the Natalie Fragrance. Visit NatalieFragrance.com for more information!2016-11-30T17:29:28Z

“I knew when she was home because I would smell her perfume,” Natasha told The Times. She had created a new perfume called Natalie in honor of her mother; the scent was based on gardenias. The newspaper reported that Natasha had rarely spoken about her mother and her mother’s death. She described her mother as “enigmatic and gorgeous.”

According to The Los Angeles Times, Natasha also created a lifestyle brand in memory of Natalie Wood. “I’m 46 [years old] now, and she died when she was 43,” said Gregson Wagner to the Los Angeles Times in a 2016 interview. “So I feel like I’m her mom now in the way that I am shepherding her legacy out into the world the way a parent would take care of a child. It’s come full circle and has been incredibly healing.”

3. Natasha Insists That Her Mother’s Death Was an Accident

When Natalie died, Natasha has said in an interview, “It was just the unthinkable. I just remember it was the worst thing ever. My whole world just went to black and white and I couldn’t hear anything.”

To The New York Times, Natasha said she was at a sleepover when the news came over the radio that Natalie Wood had died. The Times reports that, despite the questions swirling around Robert Wagner, Natasha remains “fiercely protective” of him and insistent that Natalie died accidentally.

“It’s so preposterous that I can’t even relate to it,” she told the newspaper of the questions surrounding Robert Wagner, who is known to family and friends as “RJ.” In 2018, new questions were raised about Wood’s death as the result of the CBS program, and one investigator labeled Robert Wagner a person of interest in Natalie’s death.

“As we’ve investigated the case over the last six years, I think he’s more of a person of interest now,” Lt. John Corina said of Wagner on the 48 Hours program. “I mean, we know now that he was the last person to be with Natalie before she disappeared.”

4. Natasha Is Also An Actress Who Is Known for Her Edgy Roles

Natasha Wagner looks a lot like her mother Natalie with her dark eyes and hair. Like her mother, she is also an actress. According to IMDB, she has starred in such movies as Lost Highway, Quiet Days in Hollywood, Two Girls and a Guy, and Dogtown. She is known for her edgy roles in independent films, according to IMDB.

From 2003 to 2008 she was married to D.V. DeVincentis, a screenwriter and co-producer of the movie High Fidelityy, which she starred in with the actor John Cusack. One of her most recent films was Wonderland in 2003. She has been married to actor Barry Watson, of “7th Heaven” fame since 2015. They have a daughter, Clover, together.

5. Robert Wagner Has Three Daughters, Two of Whom Are His Biological Offpring

GettyUS Actor Robert Wagner(2ndL) gets a kiss from daughter Courtney(2ndR), and wife actress Jill St. John(L), and daughter Katie(R) look on during an unveiling ceremony for his star on the Hollywood Walk of Fame 16 July, 2002 in the Hollywood area of Los Angeles, CA. W

Robert Wagner has been married to the actress and former Bond girl Jill St. John since 1990. Natasha has discussed how Natalie’s death changed the family – and Robert Wagner.

“After she died, when I would look at him from a distance, from my bedroom window walking into the house, there was a heaviness and a sadness to him that hadn’t been there before,” she said in 2016.

Editor’s Note: This story has been updated to show that Wagner was married to D.V. DeVincentis from 2003 to 2008 and added more information about her current husband, Barry Watson and her daughter, Clover.