Leslie Odom Jr. is a Broadway star, movie actor and music artist. But, tonight, he will be known as the singer of “America the Beautiful” at the 2018 Super Bowl. As part of the pre-game performances, Odom will be joined by a choir from St. Paul, Minnesota. The game is being held in Minneapolis and Odom’s performance will be shown on NBC, just ahead of kick-off. Other performers for the event including national anthem singer Pink and halftime headliner Justin Timberlake.

Many know Odom from the Broadway production “Hamilton”, the movie Murder on the Orient Express, or any of his many television show appearances. His wife, Nicolette Robinson, is also an actress. In fact, the couple met when she was auditioning for a production on which Odom was the assistant director. Odom recalled their meeting to Playbill and said, “It was my job to get her up to speed and make sure she was okay. We got very close very quickly, but normally those kinds of things — you call them showmances — end when the show ends, but ours never ended. We just had so much fun together.” Robinson also added that, “It was never an obvious, “Oh, he’s into me.” I just loved and adored this person so much; it just felt like the most amazing friendship until we finished the show. That’s when we both were like, ‘Hmm is this more than a friendship?'”

At the time that the couple met, Robinson was still in college at UCLA. Today, she is a working actress, known for her acting in shows like The Affair, Hart of Dixie and Perfect Couples. Robinson has been very supportive of her husband’s career. In fact, just before he headed to the Tony Awards for his first ever nomination, she wrote the following message on Instagram, according to Entertainment Weekly, “As little kids, we grew up in our separate households across the country from one another, watching the Tony Awards and dreaming that some day we would be a part of that world. I sit here the morning of Tony day, as you are nominated for Best Lead Actor in a Musical, and I can’t help but think of the little girl (me) and little boy (you) who would be beside themselves with joy.

When it comes to keeping their relationship romantic, Odom revealed to Playbill that, “It’s really important to us that we live our lives every single day with a little bit of romance, and that we make it special whenever we can. It’s not like we go 364 days before we tell each other that we love each other or before we take ourselves out for a nice dinner.”

Odom and Robinson met in 2008 and they married on December 1, 2012. Together, they had one child, a daughter named Lucille Ruby. Lucille was born on April 23, 2017, making the couple parents for the first time, according to People. When announcing Lucille’s birth on Instagram, Robinson posted a photo with the couple’s baby and wrote, “Lucille Ruby Odom came into this world on Sunday, April 23rd, 2017. She is the love and light of our lives and she’s teaching us so much already … Our sweet Lucy. Mommy & Daddy couldn’t be happier.” 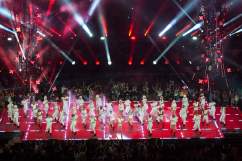 What Channel Is the 2018 Super Bowl Halftime Show On TV Tonight? When Does It Start?