Pink is this year’s national anthem singer for the Super Bowl. She has been hitting the awards show circuit over the last few months and has even been bringing her family along with her. Just recently, she brought her daughter Willow backstage to meet her idol Rihanna, as she stated on her Instagram account. With husband Carey Hart, Pink has two children. Pink married her husband, Hart, in 2006 and they’ve had several break ups over the years, but they’ve managed to power through them. On an episode of the Ellen DeGeneres Show, Pink previously explained, “We take breaks. We’ve had two breaks. The first one was about a year. And the second one was 11 months.”

So, how did the star couple meet? Pink met professional freestyle motocross competitor Hart at the 2001 Summer X Games in Philadelphia in 2001, according to USA Today. The couple split up a few times when they were dating and Pink said she would often tell him that she wouldn’t marry him. That’s probably why it was Pink who ended up impulsively proposing to Hart and not the other way around. The proposal actually went down during a race of Hart’s in 2005 when Pink wrote “Will you marry me?” on a sign. When she didn’t get a reply right away, Pink changed the sign to read “I’m serious!”

Hart has appeared in several of his wife’s music videos, including “True Love” and “Just Give Me A Reason”. He is also often seen on the red carpet with his wife. Pink’s daughter Willow was born in 2011 and she gave birth to her son Jameson in December 2016. Pink previously spoke with Access Hollywood about how she and her husband came up with their son’s name. She explained, “My dad’s name is James, and my brother’s name is Jason. [Carey and I] are both Irish, Carey’s middle name is Jason, and Jameson—we like whiskey. That’s a no brainer.”

Pink and her husband are actually raising their children as gender neutral, according to News Week, meaning that they aren’t pressuring their kids into a specific gender identity. In an interview with The People, Pink said, “We are a very label-less household … I was in a school and the bathroom outside the kindergarten said: ‘Gender Neutral – anybody,’ and it was a drawing of many different shapes. I took a picture of it and I wrote: ‘Progress.’ I thought that was awesome. I love that kids are having this conversation.”

Pink also said that her daughter, Willow, has a nickname for President Donald Trump, calling him Donald Duck Trumpet. She revealed that, “I don’t correct her. And I should, because it’s disrespectful, but it’s like – ‘fuck it’. I feel like we are all in this ­permanent state of fuck it. I can’t imagine being a third-grader and this being the first example of what it means to be President. I throw my hands up in the air every day … It’s un-fucking-believable. I want to skip ahead to the part that it’s over and we start the clean-up process.” Clearly, Pink’s household is not a supporter of Trump. Over the years, Pink has been known to speak her mind and be true to herself in her life and career. This is one of the reasons she has accumulated so many fans. 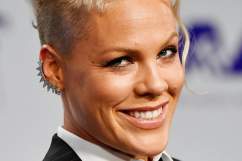 Who Is Singing the National Anthem at the Super Bowl Tonight? 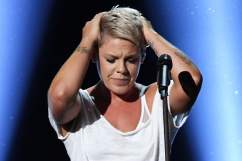 Singer Pink Has the Flu: Is She Still Performing or Lip Syncing at the Super Bowl?