Like almost any movie or TV series based on a book, it doesn’t matter if you read the book before or after you watch the series. It really just depends on whether or not you’d rather experience the twists and turns in the book first or on the TV show. In the case of Altered Carbon, there are quite a few changes made in the TV series, so some of your experiences will be different no matter what order you choose to put the book and the TV show.

When a new viewer asked this very question on Reddit, the answer from one Morgan fan (lyricyst2000) was: “You should read the books. Period. Before or after, doesnt matter. If you’re a big fan of scifi you’ll appreciate both.” However, another reader cautioned that reading the book first would spoil the ending, since this is a murder mystery. (But the reader wasn’t sure if the TV series would solve the murder in the same way as the book or not.)

If you’re the type of person who gets really annoyed when a TV show or movie changes things from the books, then you should probably watch the TV series first. Some readers are saying that they’ve felt quite annoyed by some of the changes and might have enjoyed the series more if they experienced it on TV first.

Readers do offer some words of caution about books 2 and 3. Apparently the tone of the books change quite a bit, so if your favorite part is the cyberpunk feel, that changes quite a bit in books 2 and 3. And audiobook listeners aren’t too thrilled about the narrator for book 2. They change to a different narrator and a lot of listeners didn’t like that change.

Either way, the books are masterfully written and the TV series is stunning and intriguing. You shouldn’t be disappointed whichever route you choose. 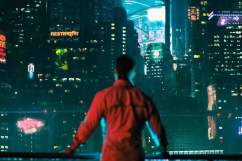 Read More
Netflix, TV
If you're watching Altered Carbon on Netflix, should you see it before or after you read the Altered Carbon book? Find out what readers suggest.