At the very end of the Discovery finale, the Discovery received a hail from the U.S.S. Enterprise, with Captain Christopher Pike commanding the ship. The character has appeared in both the main universe and the mirror universe in other series. He was the captain of the Enterprise immediately before James T. Kirk took command. It’s not surprising to see him, because Discovery takes place approximately 10 years before Star Trek: The Original Series and about 90 years after Enterprise. Since Pike was the captain immediately before Kirk, it seems understandable that Discovery would run into Pike at some point. This also means that we might see Spock too, because he served on Enterprise with Pike for more than 11 years.

At the very end of the Season 1 finale of Discovery, the ship gets a priority one distress call from the Enterprise. Captain Pike is hailing, and Spock is likely there, by his side.  Will we see them in Season 2? Aaron Harberts told Inverse: “Whether or not we see Spock and whether or not we see Christopher Pike…I mean we know very well that they would certainly be aboard that ship hovering over there by Discovery… But, we don’t want to spoil anything yet. Still, you know, there’s always a chance that those two little neighbors will exchange cups of sugar. You never know!”

In the canon, Pike was born in Mojave on Earth, joined Starfleet, and sometime before 2254 he became captain of the Enterprise. He took command at the age of 38 after Robert April, who had commanded the Enterprise for nine years. He’s appeared in numerous episodes. The very first was “The Cage” from the original series, set in 2254. His next episode is “The Menagerie” from the Original Series, when he’s promoted to Captain. But he’s severely injured while rescuing several cadets and left paralyzed, unable to speak, scarred, and only able to communicate through a light on his chair. That’s when command goes to Kirk. Pike eventually is taken by Spock (against Federation rules) to Talos, where he can spend his life in an illusion feeling that he’s in perfect health.

He’s referenced again in “Mirror, Mirror” when an alternate universe Kirk says he assassinated Pike to become captain of the ISS Enterprise. He also appears in the “Kelvin Timeline” movie series reboots, Star Trek Beyond and Star Trek Into Darkness. He has prominent roles in both. He’s the first captain of the Enterprise and is taken prisoner, given a chance for Kirk to step in. He eventually must be in a wheelchair too, but is promoted to admiral and retains his ability to speak and use his upper body. 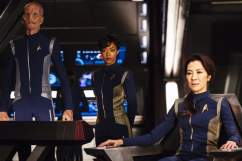 Is ‘Star Trek: Discovery’ Before or After ‘Enterprise’? Is Archer Alive?