Ryan Seacrest has been accused of sexual misconduct by a stylist that worked with him at E! Suzie Hardy opened up to Variety about her experience with Seacrest.

Last year, Seacrest learned that E! News had launched an investigation into serious claims made about him. According to The Hollywood Reporter, Seacrest proactively released a statement denying said claims. At that time, the details about Hardy’s claims were not shared publicly.

Three months after the investigation was launched, the case was closed.

“E!’s investigation was extremely comprehensive and thorough. Over the course of a two month process, our outside counsel interviewed more than two dozen people regarding the allegations, including multiple separate meetings with the claimant. The investigator is an attorney with nearly 20 years experience and is highly regarded professionally. Any claims that question the legitimacy of this investigation are completely baseless,” an E! spokesperson told Variety.

Now, Hardy is telling her story.

Hardy was hired as Seacrest’s personal wardrobe stylist at E! back in 2007.

Over the course of a few months, she noticed that Seacrest had been requesting her help “when her presence was obviously not required.” She recalled one instance in which Seacrest asked her to go to his home at 8 p.m. to tie a necktie for him. She told Variety that she refused to do so.

Additionally, Hardy told the outlet that Seacrest would hug her while he was wearing only underwear and that he did so “more than 10 times.” The uncomfortable encounters didn’t end there for Hardy.

“In 2008, according to the November letter, while walking to the set of ‘E! News,’ Seacrest slid his hand under Hardy’s crotch. In an interview, Hardy said that he slid his hand in from behind, cupped her crotch, then quickly pulled it away again. Seacrest, according to the letter, then asked her ‘Oh my god, are you going to sue me?’ to which Hardy responded, ‘not if I stay employed.'”

“The job became an ordeal as Seacrest subjected Hardy to years of unwanted sexual aggression — grinding his erect penis against her while clad only in his underwear, groping her vagina, and at one point slapping her buttock so hard that it left a large welt still visible hours later.”

When the story was first reported back in November, The Hollywood Reporter wrote that Hardy asked for money in exchange for her silence — a request that was denied by Seacrest through his lawyers. According to the Daily Mail, Hardy denies ever asking Seacrest for money (the rumors were that she asked for $15 million).

Hardy didn’t want to say anything about what was going on because she didn’t want to lose her job. In 2013, however, human resources sought her out and wanted to ask her about the nature of her relationship with Seacrest.

“I was very proud to say ‘No, I don’t [have a physical relationship with Seacrest].’ I never touched him, I never kissed him, I never f–ked him, nothing. But I said, ‘But he touched me.’ I was in there for hours. I told them everything,” Hardy told Variety.

Hardy’s employment ended after she spoke with E!’s HR department.

“Two weeks later, Hardy said, she was told that her employment at ‘E! News’ would end one week after the upcoming Academy Awards ceremony. She had no further in-person contact with Seacrest. On the day of the Oscars, she was directed to go to an empty hotel room, where she hung Seacrest’s tuxedo, then left. She did not dress him.”

Not long after Seacrest learned that he was the subject of sexual misconduct claims, he decided to release a statement, denying his involvement. You can read his statement below.

“Recently, someone that worked as a wardrobe stylist for me nearly a decade ago at E! News, came forward with a complaint suggesting I behaved inappropriately toward her. If I made her feel anything but respected, I am truly sorry. I dispute these reckless allegations and I plan to cooperate with any corporate inquiries that may result,” Seacrest’s statement read.

“I treat all my colleagues with kindness, dignity, and understanding, as this is a principle that’s core to who I am. Throughout my 25 years in the entertainment industry, the majority of my co-workers have been women, and I’ve endeavored to foster a positive work environment of mutual respect and courtesy, as that’s how I believe it should be. I’m distraught that anyone or any situation would call that into question. I’m proud of my workplace reputation, and believe my track record will speak for itself. I’m an advocate for women. I will continue to support their voices,” he added.

“It is upsetting to us that Variety is electing to run a ‘story’ about untrue allegations that were made against my client, after they were told that the accuser threatened to make those false claims against him unless he paid her $15 million. At that time, the claimant threatened to issue a demonstrably false press statement unless she was paid. Instead, my client proactively and publicly denied the claims and agreed to fully cooperate with E!’s investigation about the matter. On January 31st the network notified us that their independent third-party investigation had concluded that there was insufficient evidence to support her claims, effectively, clearing my client’s name. It’s telling that after my client refused to pay her money, and the E! investigation resulted as it did, that she is now coming forward to share her debunked story to the press,” the statement read.

3. She Is a Single Parent

Over a decade ago, Hardy was raising her daughter as a single parent. In fact, she took the job at E! because the hours were perfect for her.

At the time, she had been living across the street from Seacrest’s personal assistant who approached her about the stylist job. The gig would give her steady mother’s hours so that she could be home to care for her daughter after school. Additionally, the job afforded her a steady income, which was crucial for her as she was raising a child on her own.

“I couldn’t believe it was happening. I didn’t have to worry anymore. I was going to get a regular paycheck every week,” she told Variety. Hardy took the job.

Being a single mom heavily influenced Hardy’s decision to speak up about what she says was going on behind closed doors. She didn’t want to lose her job and she really needed the money to provide for her daughter.

“I didn’t know how to deal with it. I really didn’t. I was battling finally being in a decent financial position to breathe and be a mom, that I didn’t have to be freaking out all the time, and then dealing with this infantile celebrity person who was testing me on every level and manipulating me and knew that I was in a vulnerable position,” she told Variety.

Details surrounding Hardy’s personal life are sparse at best. It is unknown if she had been married, is married now, or if she has more than one child.

The daughter that she referred to in her in her interview with Variety is now a teenager.

“I came from a freelance life, and it was scary. It was hard to raise a child and not know where your next check was going to come from, and if that gig was going to take me out of town for two weeks. It was a better deal all the way around, even if I was being abused. It’s sick to say, but it was true,” Hardy told Variety.

4. She Has Worked With Several Celebrities Over the Course of Her Career, But Has Left the Entertainment Industry

According to her resume listed with MS Management, Hardy has worked with dozens of celebrities over the course of her career.

Although she has spent a good deal of time dressing Seacrest, she has also worked with country star Carrie Underwood, actress Emilie de Ravin, actor Ian Somerhalder, actress Jennifer Garner, and several others.

After leaving E!, Hardy felt it was best that she leave the entertainment world behind. She currently works for a tech company based in San Francisco, California.

5. She Has Styled Wardrobes for Several Publications

In addition to working for countless celebrated persons, Hardy’s portfolio also includes work for numerous publications and other assorted media.

Her online portfolio at the website for MS Management also lists Christian hard rock group P.O.D. among her credits, showing a pic from Rolling Stone’s December 14, 2000, “People of the Year” issue.

She also boasts artists Sugar Ray, Hoku, The Januaries, and Lindsay Pegano among musicians with whom she’s worked.

Hardy is also credited as the stylist for the cover of Wired Magazine’s November 2005 issue, which featured Frank Rose’s cover story, “Battle for the Soul of the MP3 Phone.” Her online resume indicates work for various outlets from Bicycle Magazine and Cigar Aficionado to Maxim, Sports Illustrated and Vanity Fair.

In addition to the aforementioned efforts, Hardy’s resume reveals she’s contributed to a variety of ad campaigns, for sports and apparel companies like Adidas, Puma and Reebok, beverage companies like Corona and Smirnoff Ice, and auto manufacturer Dodge. 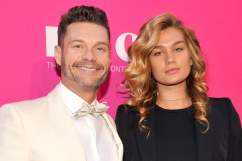 Read More
5 Fast Facts, Ryan Seacrest
Suzie Hardy worked as Ryan Seacrest's personal wardrobe stylist at E! from 2007 through 2013. She claims that he sexually assaulted her on multiple occasions.