Thrive entered the Shark Tank with their capsules that work to eliminate the causes of hangovers. Taken before bed, the pills reduce short-term alcohol withdrawal, give your liver the tools it needs to break down the alcohol and replaces the vitamins and minerals you lost while drinking.

We interviewed Brooks Powell, who invented the product idea as a sophomore at Princeton University, working with the school’s professors and an alumnus specializing in chemical patent law.

The Houston-based business gained momentum in June of 2017, and were enjoying about $1,000 a week in sales. Now, they’ve increased to $80,000 in weekly sales and are steadily growing. As for the future, they are looking to partner with major retailers like Walgreens, CVS and Walmart and this year, will introduce a more effective version of the product, which they will announce on the show.

I was in a neuroscience class and through some independent work came across an article in The Journal of Neuroscience titled “Dihydromyricetin as a Novel Anti-Intoxication Medication.” Dihydromyricetin, DHM for short, was a chemical extract -like caffeine is to coffee- that researchers found could instantly sober up rats, prevent rats from becoming alcoholic and cure alcoholism in rats. And rats given DHM showed no signs of hangovers. The study had only been published a few weeks prior using a multi-million dollar government grant as research funding. I was blown away. I brought the article to my neuroscience professor who became so excited about it that he scrapped a planned class lecture and lectured on DHM instead. My Princeton neuroscience professor said that while not all animal studies translate 100 percent to humans, drugs that affect the GABA receptor-the same brain receptor that alcohol affects- translate extremely well to humans.

How the Capsules Work

Thrive+® After-Alcohol Aid™ is designed specifically to mitigate the negative effects of alcohol. Just take 3 capsules before going to bed!

They reducing short-term alcohol withdrawal, which is the reason you can’t sleep well, lights are too bright, sounds are too loud and you have nausea. And give your liver the precursors to the enzymes it uses to process alcohol and its other toxic-byproducts. We have other things like vitamins and electrolytes, but those two primary methods are the real weightlifters in the way our product works.

Happy Friday!! It's almost the weekend! Don't forget to get your Thrive+® order in! Link is in bio!

…Amazon is like crack… once you start seeing the sales it can produce, it’s so hard to not sell on their platform. We’re selling on Amazon really well and are the best in our category by far, but we’re still figuring out ways we can add personal touches through the Amazon system that will allow us to invite customers into our story of a vision of a healthier & happier drinking culture across the globe.

We're excited to officially announce that Thrive+® will be on ABC's Shark Tank this February 25th at 10/9c (& 10pm Pacific for West Coast programming)! From the research labs to the most famous investor stage in the world… this is another exciting chapter in the Thrive+® saga. Please join America in watching us tell the story of Thrive+® and how we're creating a healthier & happier way to consume alcohol!

Every Shark has different wants and needs. So really know what they’ll ask and why the answer matters to them. You can’t treat them all the same. The tricky part is being able to answer one Shark’s question without the other Sharks feeling slighted because you aren’t answering their question first. It’s a tough game because by trying to please all of them, you’ll please none of them, and by pleasing one of them, you risk not getting the opportunity to please another. So have a game plan! 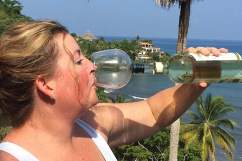 Guzzle Buddy on ‘Shark Tank’: A Look Inside the Product that Turns Your Wine Bottle into a Glass