If you were worried that a day would go by without a trailer or teaser or teaser trailer for a new Marvel movie, than rest assured. We have met our quota for the day. The first trailer for Venom was released Thursday morning, the first movie in the Spider-man extended universe. Tom Hardy stars as Eddie Brock and Venom, a character who made his debut in Marvel comics in the mid-eighties and toes the line between villain and super hero. The film also stars Michelle Williams and Riz Ahmed.

Set to be released in October, the film will be a part of Sony’s Marvel Universe, not to be confused with the Marvel Cinematic Universe and certainly not be mixed up with the DC Universe. Venom is a Symbiote, which is somewhat of alien being. The Symbiote requires a human host, which is where the Eddie Brock character comes in. Venom is thus the result of the Symbiote tag-teaming with Brock.

This will be Venom’s second time appearing on screen, with the first happening in Spider-Man 3, the third Tobey Maguire Spider-Man movie, which was before the Andrew Garfield Spider-Man movies, which were before the current iteration of Spider-Man, played by Tom Holland, who plays the teenage web-slinger in Spider-Man: Homecoming, as well as the upcoming blockbuster Avengers: Infinity War. In Spider-Man 3, the Brock/Venom was played by Topher Grace and Sony had been plans of developing a Venom stand alone film during that time, but it was eventually shelved. 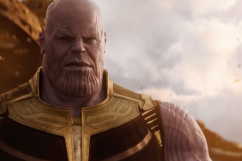 Venom will exist outside of the universe occupied by the Avengers and will have more in common with Marvel’s R-rated movies such as Deadpool and Logan. The film is said to have a horror movie vibe to it, which makes sense given the rage and demonic nature that comes with the Venom side of Hardy’s character.

The trailer doesn’t show a whole lot, which I suppose is why it’s called a teaser. Ha, I get that now. Either way, it does allude to a painful backstory that haunts Hardy’s Brock character, which may include at least one, if not all of the following: a break-up, a death and/or an accident. As Hardy says in a voice-over, “whatever it was, you used to be one of them. Now you’re something else.”

Also seen in the trailer is Williams looking both concerned and sad, as well as Ahmed apparently studying the alien symbiote. What remains unknown is how Brock is introduced to the symbiote and where things go from there. Again, this is why it’s a teaser and not a trailer.

Venom is set to be released on October 5th and will be directed by Ruben Fleischer, who is best known for directing the 2009 cult-hit Zombieland.