Tonight Hallmark is premiering the last in its Valentine’s movie series, Royal Hearts, at 9 p.m. Eastern. But where was it filmed? Was it really filmed in Merania? You might be surprised to learn that this movie actually had some pretty exotic locations. The movie stars James Brolin, Cindy Busby, and Andrew Cooper, and it’s about a rancher who learns that he’s actually a king. The movie is a creative look at the lives of royalty, and it’s sure to tug on the heartstrings of hopeless romantics. But can you visit the locations where it was filmed?

Royal Hearts was filmed in Romania over the summer, including Bucharest and Transylvania. Although Merania doesn’t exist in real life, the idea for the fictional Merania has deep historical roots. The ancient Duchy of Merania did exist and is actually near where the movie was filmed. Duchy of Merania was a territory of the Roman Empire and existed until about 1248 AD, Bustle reported. So if you want to visit the set and get an idea of what Merania was like, you’ll have to do quite a bit of traveling. But it will likely be worthwhile!

Royal Hearts was filmed in multiple locations in Romania. It was filmed in Castel Film Studios. Some interior shots were filmed at Bucharest’s Cantacuzino Palace. Some shots of Merania’s castle were also filmed at Corvin Castle in Transylvania. Here’s Cindy Busby talking about what it was like to film in some of those locations. “It really brings an authentic, real energy to the project,” she said. “And the locations are just so stunningly beautiful and intricate…”

Its A Wonderful Movie interviewed Busby about her experiences filming in Romania. Busby said she had never been to Europe before. “From the moment I stepped off the plane, to seeing the city of Bucharest and Sinia (where we shot), to working with the incredible cast and crew was beyond magical,” she said. “We shot a lot of the movie in real castles and prestigious homes, so every bit of intricacy is original, historic, and rich.”

The movie also stars James Brolin, who also directed the film. When Hallmark approached him about starring in the project, he said he would only do so if he was allowed to direct.

It’s unusual for Hallmark to film a movie on location. Most of the channel’s movies are filmed in Canada, even if the stories themselves take place in the United States. But Royal Hearts is a big exception to that rule. It filmed for 18 days in Romania over the summer. Brolin played Hank, a Montana cowboy who has to travel with his daughter to the country of Merania, where he learns he is secretly king.

Interestingly, the movie came out the way it did because of some tough negotiating by Brolin, Telegram reported. Brolin actually quit the project at one point and returned to Los Angeles early because he was fighting for some specific locations where he wanted to film. He also was fighting for certain parts of the script that he wanted to keep intact. They wanted to take out scenes where Brolin’s character missed Montana, and scenes that talked about how he and his daughter weren’t getting along so well, Brolin revealed to Telegram. “That was a fight I had all the way through the filming. They wanted me to give in and I said this guy never gives in. He will stay around and help but as soon as the job is done, he will be out of there.” Brolin’s talent with horses and cattle is real. He had a ranch in central California where he trained horses for 13 years and trained dogs for five years.

What did you think of the movie’s setting? Let us know in the comments below. 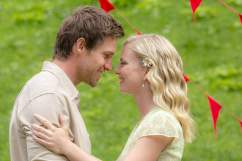 Hallmark’s ‘Royal Hearts’: Learn All About the Cast & the Movie

Read More
Hallmark, TV
Where was Hallmark's Royal Hearts filmed? Is Merania a real place? Learn all the details here.