Tonight Hallmark is premiering a new Valentine’s movies, Wedding March 3: Here Comes the Bride. It’s the third in the Wedding March series, and we hope there are many more to come after this one! But where was it filmed? The movie may have been filmed in Canada, but if you want to get married at the same resort,  you actually can. Read on for more details. And after you finish reading this story, let us know in the comments if you think Hallmark should make a fourth movie in the Wedding March series.

It’s no surprise that Hallmark keeps making more movies in this series! The original Wedding March debuted to a remarkable 2.3 million viewers when it premiered during Hallmark’s June Weddings series. The third movie was originally called Wedding March 3: A Valentine Wedding. Like the movies before it, this movie was filmed in British Columbia and Vancouver and other areas in Canada, What’s Filming reported. And the wedding venue is located at Rowena’s on the River. This movie was filmed earlier than many of its peers: back in June.

Here are some more specific details about filming locations. Hemlock Valley was filmed in Agassiz, British Columbia. Agassiz is a small community north of Chilliwack and 97 km east of Vancouver. Montrose Avenue scenes were filmed in Abbotsford.

Hey, thanks for the heads up! It's a Hallmark movie called The Wedding March 3.

The beautiful wedding venue where the movies take place was filmed in Harrison Mills, British Columbia, west of Agassiz. More specifically, the resort is located in real life at Rowena’s on the River, according to I’ve Scene It on Hallmark. Harrison Mills is located in the foothills of Fraser Valley. And charming Rowena’s on the River is a 160-acre estate that was built in the 1800s. It was originally owned by the Pretty family (hence why it’s called Pretty Estates Resort), and now it features an inn, four cottages, a restaurant, and a golf course. Kerry from I’ve Scene it On Hallmark interviewed the owners of the estate to get more details (and actually stayed on the property too, so you’ll definitely want to visit their article for more details.). Kerry learned that the Pretty couple originally bought the land in 1924. Charles Pretty built a dam to produce electricity for the property on the land. Kerry wrote that the property was just as beautiful in person as it looks on TV.

Only a couple hours east of #Vancouver, Rowena’s Inn on the River is a natural work of art. We host weddings in the Spring, Summer, Fall and Winter. #Elopements too! Learn more: https://t.co/TPonVkfs1L #VancouverWeddingShow Booth 408!! pic.twitter.com/amgdg6lwhy

Note: Rowena’s Inn on the River is also called Pretty Estates Resort. And yes, they offer wedding packages. Here are some more photos:

"Short weekend get aways ♡"
What a great set of photos from Jessica Raechelle of Rowena's Inn on the River!#Scenic7BC pic.twitter.com/vkZeFetOUE

Today's blog post is about my Mother's Day getaway to Rowena's Inn on the River…with Mom https://t.co/9DdnIADdav pic.twitter.com/0T8Exf9GFV

Would you like to visit Rowena’s Inn on the River and see where the movie was filmed in person? 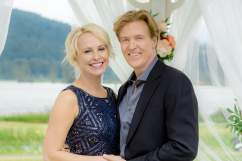 Is Hallmark Going To Make a ‘Wedding March 4’?

Read More
Hallmark, TV
Find out where Hallmark’s Wedding March 3 was filmed, and how you can get married in the same location.