Winchester is the newest horror movie by directors Peter and Michael Spierig. Set in the 1800s, the story follows Doctor Eric Price who has been contracted by the Winchester Company’s board of directors. His job is to venture to the Sarah Winchester’s estate to evaluate her mental health and determine if she is fit to run the company. The board believes that Sarah has become reckless in her spending since she has poured her funds into endlessly constructing, breaking down, and reconstructing her mansion.

While Winchester is fairly straightforward in its premise there are enough twists and callbacks that you can lose track if you’re not paying attention. Below we will be going over the third act and ending to Winchester, as well as explaining various moments in the story that are important for the ending. Keep in mind this will not explain every character in extreme detail or the main story. We are going under the assumption that you have at least watched the film or at least the first half.

Still with us? Good. The third act for Winchester kicks off with Eric Price still refusing to believe that there are spirits inside Sarah’s house. Despite seeing them over the past few days, Price has concluded they are hallucinations due to him going through withdraw since he stopped taking a poisonous medicine. We also learn through a conversation with Sarah that Price actually died for three minutes from a Winchester rifle bullet wound. Because of this, Price has a connection with the dead and can see spirits of the deceased in the house.

Additionally, the house is built to reconstruct the rooms that people died in so their spirits can find peace. Those who cannot come to terms with their fate are locked inside of their death room via 13 nails. While most of the spirits are fairly docile, one has proven to be dangerous and malicious with it frequently haunting Sarah’s young nephew, Henry.

As the third act begins we see young Henry become possessed by this evil spirit once more. This causes him to take a rifle out of the newly constructed showroom, load it with ammo, and take shots at Sarah. Right before she is killed, Eric Price, the foreman, and Marion (Henry’s mother) stop him. Sarah realizes how dangerous this ghost is and confines Marion and Henry to a room, despite Eric’s pleas to take Henry to a hospital. However, there is a second entrance to the room via the closet which is protected by 13 coat hooks. Sarah rushes to the new showroom – which she constructed at the instruction of the evil spirit – to try and figure out who or what this is.

We then learn that the spirit is one Ben Block, a Confederate soldier who lost both of his brothers in a battle to Winchester rifles. Seeing these guns as the evil, Ben attacked a Winchester showroom and killed 13 people before being shot himself. Now, Block’s spirit is extremely angry and seeks to destroy Sarah and wipe out her entire family. When she attempts to contact him, the spirit of Block lashes out, kills the foreman, tosses Eric out of the room, and locks Sarah inside. Additionally, all of the sealed rooms with the restless spirits unlock allowing them to escape.

We also learn that Henry has become possessed once again and slips out of the room without his mother noticing. Meanwhile, Eric realizes that he needs to face his own demons and heads down to a locked greenhouse. Breaking inside, it’s revealed that this greenhouse is a replica of the place where he and his wife died. Despite Eric being resuscitated back to life, his wife never made it and has become a spirit trapped in this house. In a hallucination, Eric relives the experience of him trying to stop his wife from killing herself only to get shot himself. His wife then kills herself believing she murdered her husband. When Eric is brought back to life he keeps the bullet that had him pronounced dead for three minutes and reforges it as a reminder of his past. Realizing his inability to move on from this event was what held him back, Eric forgives his wife and encourages her to find peace.

Eric then wakes up from his vision to find all of the other ghosts watching him. However, they do not view him as a threat and all realize that Block is the true menace. Leading him through the house, Eric is given an ax and 13 additional nails. He uses this ax to cut a hole in a ceiling that ends up being the showroom’s floor. Climbing in, he speaks with Sarah and the two conclude that only he can stop Block. Using a showcase, Eric seals the hole he made with 13 nails, trapping Sarah, himself, and the spirit of Block in the room.

Meanwhile,  Marion goes looking for her son Henry who ends up being in the boiler room. Stuck here, the two spirits of Block’s dead brothers slowly close in on the duo without them knowing. Cut back to the showroom and Eric has a small fight with Block only to learn that the only way to hurt him is to use the same model rifle that the spirit used when he was alive. However, normal rounds go right through him and it’s only when Eric uses the bullet that killed him does the spirit finally “die.” This is because the bullet caused a death and thus has a significant power in the afterlife.

Right as Block is shot with this special bullet, his brother’s spirits lose their power and slowly fade away. Saving the day, Eric and Sarah reunite with Henry and Marion, discovering that everyone in the principal family is okay. We jump forward in time to see Eric tell the Winchester company that Sarah is fit enough to run the company. The house is currently under construction once again, however, now the greenhouse can finally be taken down since Eric’s wife is at peace. Winchester’s last shot is a nail falling out of sealed room’s board, indicating that perhaps all of the spirits haven’t returned to their rooms

What’s interesting about Winchester is there are subtle hints throughout the movie about this main plot. One of the most obvious is the southern butler that Eric keeps talking to is Block, mainly because no one else in the entire estate acknowledges this butler. Only Eric appears to see him, which means that he has to be dead since the doctor is the only living person with this power. Another clue is the constant references to a deer which appears in Eric hallucinations because it’s the symbol on the gun his wife used to kill herself. This is the same type of gun that Block used on himself as well, establishing their deeper connection to one another.

It’s also explained that Henry wears the bag on his head because Block did when he was alive and shot up the showroom. Whenever Henry has the bag on his head it’s clear that the spirit of Block has taken over his mind. Despite having some fun moments, Winchester is a fairly mediocre horror movie. If you haven’t seen the film we recommend skipping it for now. 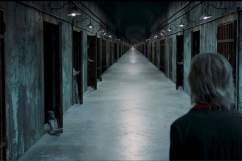