A teaser trailer for Ralph Breaks the Internet: Wreck-It Ralph 2 dropped this morning, giving us a better idea of the movie’s story as well as announcing its release date of Thanksgiving 2018. Eagle-eyed viewers were able to spot some interesting parallels between the trailer and another popular, modern Disney property.

The trailer sees the titular Ralph and his friend Vanellope Von Schweetz hopping into a cable and traveling to the internet. Along the way they encounter clickbait headlines and an eBay auction house. By far the most memorable moment occurs when Ralph and Vanellope crash an iPad game and stuff a bunny with so many pancakes that it explodes. We don’t get to see the explosion, but we do get to see the terrified screams of the little girl playing the game.

According to some users on Twitter, that’s not just any little girl. The child appears to be modeled after the toddler version of Moana from the 2016 film of the same name.

#WreckItRalph2 is obviously going to be FILLED with Easter Eggs.

Found my first one!

The design of #Moana as a child looks to have re-used! pic.twitter.com/8lsWiC5GhZ

After watching the #WreckItRalph2 trailer again, I realized that the little girl playing the tablet game looks just like baby Moana!!! pic.twitter.com/WGwn4onBdA

So in #WreckItRalph2 , baby #Moana isn’t afraid of stories of Te Ka engulfing her island home with inescapable death, but is terrified of an exploding digital bunny? @DisneyAnimation @auliicravalho pic.twitter.com/HeiUl1OjfE

So, @Plainsville pointed this out to me, but… Did you notice they reuse the baby Moana model in #WreckItRalph2 ? pic.twitter.com/g5LrAAQzdd

That’s not the only reference to another Disney property either. Apparently the frying pan from Tangled and the magic lamp from Aladdin are on sale at the eBay auction house.

Are Rapunzel’s frying pan and the genie’s lamp on eBay in #WreckItRalph2? pic.twitter.com/oRh7q1H0HH

The film is reportedly going to incorporate many of the most popular Disney princesses. MTV News attended D23, Disney’s fan expo in Anaheim, California, in July 2017 where attendees got to see a work in progress scene from Wreck-It Ralph 2 in which Ralph and Vanellope find themselves in Disney fan site OhMyDisney.com. Vanellope reportedly sneaks into the dressing room for Disney princesses to mess with them. The princesses catch Vanellope and prepare to attack but she tells them that she’s a princess too. The scene then cuts to a slumber party where they all tell their secrets, such as Jasmine being allergic to cats and Snow White wearing glasses. C-3PO shows up as well. Disney even got the original voice actresses to reprise their roles, with the cast making an appearance at D23. Oh, and Moana is included in the scene as well. In fact, Moana’s voice actress Auli’i Cravalho told Entertainment Weekly that “The rest of the Disney princesses have teamed up and are helping Wreck-It Ralph 2 in its kind of digital age, which is really fun to see. It was a blast recording for it and I can’t wait for people to see it.”

So there you go. The child with the iPad may not be Moana but we have confirmation that the princess will be in the film. Of course, we’ll have to wait and see for ourselves when the film releases this Thanksgiving.

Notice any other cool Easter eggs in the teaser trailer? Let us know in the comment section below. 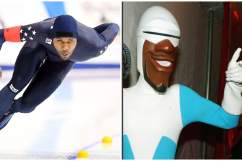 Shani Davis May Have Inspired the Character ‘Frozone’

Read More
Animation, Disney, Movies
A teaser trailer for Wreck-It Ralph 2 dropped today and viewers were quick to point out similarities between it and another big Disney property.