Tonight, Adrienne Cheatham is heading into the 2018 finale of Top Chef and she’s hoping to leave the kitchen as the season 15 winner of the show. Going into the competition, her advice for future contestants, as well as for herself, is, “Be confident in what you’re doing. Once you start to second-guess yourself that’s when you tank. Cook to the best you can. Just own it. Do the things you believe in, the things that are you,” according to the Chicago Sun Times. The finale tonight airs on Bravo at 9 p.m. ET/PT and tonight’s competition will determine who takes home the title of Top Chef. Get to know more about Cheatham, her competition and her life outside of the show.

1. Her Mother Did Not Want Her to Get Into the Culinary Industry

Caption this! My mother is a true hospitality industry OG and although she tried to keep me out of it she’s had my back the entire time . . #mama #OG #restaurantlife #foh #boh #supportsystem #guidance #lovebeyondwords #truecooks #inmyblood #topchef @bravotopchef

Growing up in Chicago, Cheatham started to follow in her mother’s footsteps, which wasn’t what her parents wanted for her. Cheatham told the Chicago Sun Times, “The whole idea of cooking started with my mom who worked at Mellow Yellow [Restaurant] on 53rd Street, [among other eateries]. I was literally raised in the non-smoking section of Mellow Yellow because every day after school my sister and I would go to the restaurant and we would sit in that section and do our homework while mom finished her shift, and then we’d walk home together … As I grew older, somebody would call out from the kitchen and say, ‘Hey can you help bus tables!’ ‘Can you run food?’ And I’d help with that. But I’d always gravitate to the kitchen.”

To Cheatham, she says that restaurants mean family, though her mother would have rather she not pursue a career in the culinary industry. Cheatham explained that, “My mom was so against it because she saw so many of her friends try it and get totally burned out, so it was never an option for me not to go to regular college. I pursued a career in journalism because I knew I would be able to tie that back into food [writing].” Eventually, however, Cheatham found her way into the kitchen. She even became the executive chef of the restaurant Red Rooster in Harlem.

2. Joseph Flamm Is Her Competition in the “Top Chef” Finale

The final round airs tonight!! Watch me and @insta.flamm go toe to toe on @bravotopchef for the title!!! #chicago #southside #showdown #justacouplekidsfromchicago #topchef #finale #battleroyale

A post shared by Adrienne Cheatham (@chefadriennecheatham) on Mar 8, 2018 at 8:22am PST

Joseph Flamm is the executive chef of a Michelin-starred restaurant and he is up against Cheatham in the finale for season 15 of Top Chef. He is actually friends and a former co-worker of Top Chef season 4 winner Stephanie Izard. During episode 9 of the show this season, Flamm was eliminated, but he fought his way back and won Last Chance Kitchen. This qualified him to return as a contestant on Top Chef and now he’s up against Cheatham for the win.

Prior to heading into the finale on the show, Flamm talked about winning Last Chance Kitchen to Parade, exclaiming that, “It was really crazy. I had gone home already, so I was just enjoying it. I had already thought my season was over, so this was all just icing on the cake. Then coming back, I thought, ‘OK, I guess there’s really not many of us left.’ It was four of us; then it was three of us. The moment where they said, ‘You’re going to the finale,’ I [just thought], ‘Holy [expletive]. (Laughs.) What now?!’ It was just so unbelievable.” The grand prize for Top Chef includes a $125,000 cash prize.

3. Cheatham Said the Key to “Top Chef” Is Treating It Like a Real Kitchen

Sometimes, the contestants on the show can be at each other’s throats, but this season had a much more family-like vibe. Cheatham explained to Parade, “I think you get more out of it if you treat it like you’re in a kitchen. Everybody matters, you want to get along well. As a chef—line cook, sous chef, head chef—you don’t exist in a bubble in the kitchen. You have good service based on how well everybody does around you. The people you want to work with are the people who are in good moods and make the stress seem better. Everybody had that similar kitchen mentality where nobody’s like, ‘I’m just here for the competition.'”

Cheatham has also revealed that she gets along very well with her fellow finalist, Flamm, in addition to the other competitors on the show. She told Parade that, “Joe is a genuinely good person. The first time I met him, I didn’t know he was from the south side of Chicago, but I was like, ‘There’s something about this guy that I like.’ You feel easy, you feel comfortable.”

4. Cheatham Is Starting Her Own Restaurant in Harlem

Cheatham is starting her own restaurant in Harlem and the Chicago Tribune has reported that if she wins Top Chef, Cheatham will invest the money in pop-up series she would like to start. According to The Daily Meal, Cheatham aims to call her restaurant Sunday Best.

5. She Plans to Get Married This Month

Not only is Cheatham currently celebrating her time on Top Chef, she is also planning to get married soon in New Orleans. Cheatham and her fiance, Stephen Bailey, are registered on Zola.com and you can find the registry here. The tagline on their registry reads, “Your love and support are the best gifts, but there are a few things that would help make the start our new life even better!” Their wedding date is set for March 17, 2018.

According to Bravo, if Cheatham were trapped on a desert island, she says she would want to bring the following: “I would want [my fiance] Stephen Bailey with me, a case of wine, a knife, and a source of fresh water … I’m assuming we can make salt by drying the sea water on leaves in the sun.” 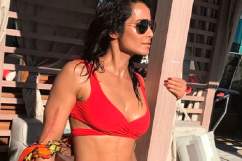 ‘Top Chef’ Padma Lakshmi’s Arm: How Did She Get Her Scars?