Tonight is the premiere of the American Idol reboot and we’ve got all the info on what to expect. Read on below for the TV schedule of the show’s episodes, live stream info, and more show details.

TV CHANNEL: The show airs on the ABC network and to access the ABC channel finder, so that you can locate your local station, you can find details here. In previous years, the original American Idol aired on the FOX network.

LIVE STREAM: There are several options available for watching the show online. Find the options for cable-free live streaming here.

CAST: The judges this season are Katy Perry, Lionel Richie and Luke Bryan. Prior to the original show going off the air, Perry was a guest judge on the show and was direct, to say the least, with the contestants. Today, Perry tells People that, “Personally, I’m a straight shooter. I’m very cut and dry sometimes. You know it seems a little not soft I do try and watch myself because I do know how it feels to be in their shoes. I was in their shoes ten years ago.” Recently, Bryan appeared on several morning shows to talk about his judging gig and said that prior to taking the job, he hadn’t realized how many people he’d have to say “no” to in the auditions. That was difficult for him. Longtime host Ryan Seacrest has returned to the series. iHeartRadio DJ Bobby Bones is set to be the mentor for the Top 24 contestants this season.

EPISODE 1 OFFICIAL ABC SYNOPSIS: After searching the country for the best of the best talent America has to offer, viewers will be taken on a journey through the stories of talented musicians from far and wide – from garage band rockers to national anthem singers to caretakers – who all have the same passion: a love for music. In the first audition episode, the show will head to New York, Los Angeles and Nashville where aspiring singers will audition for a chance to see if they have what it takes to earn the coveted golden ticket to Hollywood.

EPISODE 2 OFFICIAL ABC SYNOPSIS: “American Idol” heads to New York, Savannah, Los Angeles and New Orleans as the search for America’s next superstar continues on its new home on America’s network … streaming and on demand. In episode two of auditions, Idol hopefuls, including a shoe salesman from Washington D.C., a construction worker from Southern California and a student from Louisiana, sing their hearts out for the judges to see if they have what it takes to earn a ticket to Hollywood. 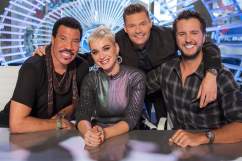 ‘American Idol’ 2018 Live Stream: How to Watch the Premiere Online