Composer Andrew Lloyd Webber has had several wives and children over the course of his life. He also has music in his blood, with several of his family members in the same field as he. Get to know more about Webber’s family, his parents, brother, children and wives. Read on for the facts.

1. Webber Has Been Married Three Times

Currently, Andrew Lloyd Webber is married to Madeleine Gurdon, with whom he has three kids. Prior to meeting her, Webber was actually married twice. Webber’s first wife was a woman named Sarah Hugill and the two married in 1971, later divorcing by 1983. According to The Guardian, Hugill was only 18 years old and Webber was 23 at the time that they married. Webber’s second marriage was to singer Sarah Brightman, who The Guardian reported he was having an extramarital affair with while married to Hugill. The two got married about a year after his first marriage ended, in 1984. Brightman was actually cast as the lead role in Webber’s legendary musical “The Phantom of the Opera”. The couple ended up calling it quits in 1990 and they never had children together.

2. His Parents Were Also In the Music Industry

I only found out tonight that Andrew Lloyd Webber wrote Requiem after the death of his father as a way of coping with his grief.

Pie Jesu has always been one of my most beloved and treasured pieces of music.

Webber followed in the musical footsteps of his parents. His father, William Lloyd Webber, was a composer and organist, while his mother, Jean Hermione Johnstone, was a violinist and pianist. Both of Webber’s parents have passed away.

William, while having a successful career in music, also took up teaching at the Royal College of Music, where he too went to school, in his life. In a piece he wrote for The Guardian, Webber’s younger brother, Julian, discussed how his parents met, writing that, “By 14, my father had become a renowned organ recitalist – playing and broadcasting from churches and cathedrals all over the country. He won a scholarship to the Royal College of Music, where he studied composition with Vaughan Williams and, by the time the second world war broke out, he had developed a parallel career as a composer and organist. At the college, he met my mother, Jean Hermione Johnstone – a pianist and violinist who was studying with Elgar’s friend, the violinist Billy Reed – and they married in 1942.” Julian also wrote about his mother dealing with a family tragedy while she was a girl. He explained, “My mother had suffered as a child. Not only had she never known her father – her parents had divorced when she was very young – but her beloved brother, Alastair, had drowned at sea when she was 13.” Andrew Lloyd Webber actually named one of his children after his mother’s late brother, Alastair.

3. He Is Not Leaving His Fortune to His Children

GettyAccompanied by his wife Madeleine Gordon and children, British musical composer Andrew Lloyd Webber arrives into the Munkacsy Hall of the parliament building in Budapest 30 May 2005 prior to his decoration with ‘Commander Cross of Hungarian Republic’ by Hungarian Prime Minister Ferenc Gyurcsany. His new musical at the time, ‘The Beautiful Game’, was presented in the ‘Madach Theatre’ of Budapest 29 May.

In Webber’s marriage to his first wife, he had two children – Imogen Lloyd Webber and Nicholas Lloyd Webber. Imogen told Telegraph that she makes her success as an author on her own, and without her famous dad’s help, explaining that, “I’m not a socialite or party-girl. I hate it when I get called that. I’m an author. I work hard at what I do … My dad taught me to be independent and work hard to get what I want. I’m proud of everything he’s achieved and I want to be known for my own achievements, too.”

Webber didn’t have more children until his third and current marriage. Together, the couple had three children, totaling 5 for Webber. The Daily Mail has reported that Webber isn’t one to give hand-outs and he won’t be giving his $750 million fortune to his kids. The composer explained, “I am not in favor of children suddenly finding a lot of money coming their way because then they have no incentive to work. So I will give them a start in life but they ain’t going to end up owning the Really Useful Group … It is extremely likely that my wife Madeleine will outlive me so I will leave the problem with her … It is so unusual that it’s a family company and I think the question is who runs it. I think it is unlikely that I want to see it caught up with family. Even if family have a connection with it, it should be about putting something back into the theatre.”

4. Webber’s Brother Is a Well-Known Musician

Webber has a younger brother named Julian Lloyd Webber, who is an esteemed solo cellist and conductor. He is also the principal of the Royal Birmingham Conservatoire. Composer Herbert Howells was actually Julian’s godfather. Like his big brother, Julian had several wives and he is currently married to fourth wife, Jiaxin Cheng, who is also a cellist. The couple married in 2009 and they have one child together.

When talking about how she and her husband met, Cheng told the South China Morning Post that, “My husband, Julian Lloyd Webber and I met in 2000, when he was on a concert tour of New Zealand. We kept in touch and reunited during his tours in 2004 and 2006. Then he asked if I would consider investigating whether a relationship between us would work, prompting me to travel back and forth between London and Auckland. Eventually, I gave up my career in New Zealand to follow my heart and we married in 2009. The 23-year age gap does not faze me because Julian is young at heart.”

5. His Aunt Was a Stage Actress

Broadway was just in Webber’s blood. Most of his family was in the music industry and as a child, he would put on “productions” with his younger brother, Julian, and his Aunt Viola. They would put on little musicals in a toy theatre that his aunt reportedly advised Webber to build. Aunt Viola was actually an actress and would take her nephew to see many of her shows. 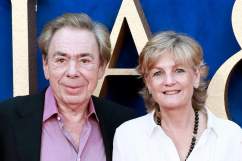