Tonight is the dramatic three-hour finale of The Bachelor 2018, with Arie Luyendyk Jr. faced with a difficult decision … picking between two women, who he has admitted to being in love with … Becca Kufrin and Lauren Burnham. Now, before we get into what to expect on tonight’s finale, along with major spoilers for the show’s ending, as well as the After the Final Rose special, THIS IS YOUR WARNING. If you do NOT want to know the outcome of the season or what happens on ATFR, STOP READING NOW.

Before we get into the After the Finale Rose spoilers, you have to be filled in on the outcome of the finale episode. Basically, Arie Luyendyk Jr. gets down on one knee and proposes to Kufrin. She accepts and the finale goes as usual … Unfortunately for Kufrin, Us Weekly reports that just a couple months later, Luyendyk breaks up with her for runner-up Burnham. The news was first reported by blogger Reality Steve about a month ago. After breaking it off with Kufrin, Luyendyk reportedly begs Burnham to take him back and she does, but the two do not get engaged.

Now that you’re brought up to speed, let’s get into the After the Final Rose special. Kufrin, Burnham and Luyendyk are all scheduled to sit down with host Chris Harrison. In addition, there are a couple special guests, who are set to appear and weigh in on the situation.

Something like Luyendyk’s change of mind has only happened once in the history of the show and that was with Jason Mesnick, the season 13 star of The Bachelor. Reality Steve has reported that Mesnick and Malaney will be a part of the AFTR special, but we will have to wait and see if they actually appear. On the show, Mesnick proposed to Melissa Rycroft and they had the picture perfect finale for their season. Then, on the ATFR special, it was revealed that the two had not spoken and Mesnick realized he made a mistake. Mesnick revealed that he realized he wanted to end up with Molly Malaney. On the special, Malaney took Mesnick back and the couple married in 2010 on a two-hour special, titled The Bachelor: Jason and Molly’s Wedding. Today, the couple has two children together.

So, if anyone can understand the situation is in, Mesnick would be the one, right? In an interview with The Huffington Post, Mesnick had revealed that production told him he had to break up with Rycroft on the After the Final Rose special and there was a specific reason why. Mesnick explained, “The biggest thing [producers said to me prior to filming After The Final Rose] was, ‘Jason, we [now] want Melissa to be the next Bachelorette. Because we’re going to let you ask Molly out, and you can’t do that away from the camera because you’re under a five million dollar contract [to not make contact with the runner-up], we need your help to have America feel for Melissa in the same way they felt for you when DeAnna [Pappas] dumped you. The fans just need to feel sorry for Melissa. Work with us and we’ll let you have Molly.’ That’s what they told me.”

Now let’s get back to Luyendyk’s After the Final Rose special. He and Burnham are reportedly NOT engaged, so there’s always a chance that Luyendyk could pop the question, but we feel like this may not happen. When it comes to the official plot description by ABC, for the ATFR special, it states, “Arie’s soul-searching journey continues after America followed the chaos of his being in love with two women, which played out in gut-wrenching fashion. Arie, Becca and Lauren all will be together in front of a studio audience with host Chris Harrison to discuss one of the most emotional, stunning endings to any Bachelor season … Special guests, including some of the provocative women from this season, Bekah M., Kendall, Seinne and Tia, will discuss Arie’s dilemma and his astonishing choices.”

We also know that ABC will reveal the next star of The Bachelorette, and our top pick for this is Kufrin, after all she has been through … But, will she be ready to find love again so soon? 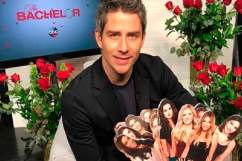 Who Is Arie Luyendyk Jr Engaged To?