Actress Cynthia Nixon is running for governor of New York this coming September. She made the announcement on Monday, March 19, posting a video on Twitter.

“I love New York, and today I’m announcing my candidacy for governor,” she wrote.

Nixon, who is best-known for playing Miranda in Sex and the City, is married to Christine Marinoni. They have been together since 2004 and have one child together, a son named Max.

Marinoni started dating Nixon in 2004, but the two actually met a few years prior and became friends. According to Advocate, they met in 2001 when Marinoni was working as an education organizer. At the time, “Nixon was campaigning to reduce public-school class sizes in New York City.”

The two started working on political projects together, and became very close. However, Nixon was seeing someone at the time — her now-ex, Danny Mozes, whom you can read about in Fact 5. As questions about Nixon’s relationship with Marinoni started to intensify, Nixon felt that she needed to hire a publicist to help her cope with the media attention. At the time, Nixon and Marinoni were determined to keep their budding relationship out of the papers, so they continuously said that they were “just friends.”

During this time, Nixon’s relationship with Mozes started to fall apart. She leaned on Marinoni while going through her split and the two women became even closer. They eventually decided to confirm the dating rumors, but Nixon was determined to keep Marinoni’s identity private.

“I had never dated a woman before or even kissed a woman or anything. So when we started seeing each other, Christine kept waiting for the other shoe to drop, for me to panic about what this would mean – to my career or to myself – as if somehow I just hadn’t noticed that she was a woman. And then she met my mother and that was when she stopped worrying about it,” Nixon said in an interview with the Radio Times last year.

Although the two women still live relatively private lives, Nixon has been a bit more forthcoming about her relationship, especially since marrying Marinoni.

In 2009, Nixon announced that she was engaged. However, she and Marinoni wanted to get married in New York and said that they’d wait for gay marriage to be legal in the state before tying the knot. In May 2012, the women exchanged vows in the Big Apple.

People Magazine posted a picture from the couple’s wedding day. Nixon wore a green-colored gown designed by Carolina Herrera, while Marinoni wore a suit with a complimentary green tie.

After getting married, Marinoni figured that it’d be best if Nixon referred to her as “my spouse,” but Nixon wasn’t having any part of that.

“[Christine] protested a lot at the beginning and wanted a more gender-neutral term, like ‘my spouse.’ I said, ‘You think I’m doing that, you’re crazy,'” Nixon told the Radio Times, explaining that she was more than okay calling Marinoni her “wife.”

In 2011, Marinoni quietly gave birth to the couple’s first child together (Nixon has two other children from her relationship with Mozes). Nixon never announced that she and Marinoni were expecting a baby together, and were able to keep the news quiet until after the child’s birth. According to People Magazine, Max Ellington Nixon-Marinoni was born on February 7 of that year.

“Christine and baby are doing great,” a rep told People Magazine at the time. Max has a full head of red hair, as you can see in the photo above, which is the only picture that Nixon has shared of Max on her Instagram page.

When Nixon and Marinoni first started dating, Nixon was really attracted to how well Marinoni got along with her two kids, Samantha and Charles. In fact, Marinoni stepped up to the step-mother plate with ease, and it didn’t take long before Nixon’s children started referring to her as “ma.”

“[Charlie’s] teachers were just so great about it because they were the first people that started referring to ‘Charlie’s moms,’ which is so lovely, and we really hadn’t done that yet. So Charlie came home one day and he said [to Marinoni], ‘You’re my mommy too,'” Nixon explained. She said that she then started referring to Marinoni as “Mama Christine” to see if her kids would take to it — and they did.

“I said, ‘Charlie, where’s Mama Christine? Is Mama Christine in the other room? Would you take this to Mama Christine? What does Mama Christine want for breakfast?’ I did this a nauseating amount, and one morning we’re at breakfast and Christine is in the shower and Charlie says, ‘Where’s Papa?’ My daughter says ‘Papa? You mean Daddy?’ And he said ‘No, Papa! Christine!’ He’d come up with this masculine name for her. It’s gone through a whole series of things,” Nixon told Advocate back in 2010.

“Maybe I’m just lucky, but I feel like Christine is so amazing with our kids – because they’re our kids. I feel like falling in love with her is part of being amazed at how she makes our family so much better,” Nixon added.

Nixon and Marinoni currently raise their family in a $3.25 million home in Noho.

3. She Is an Activist

Marinoni started out as an education activist, but now she focuses on both education and LGBT issues. She also serves as “the senior adviser for community partnerships reporting to New York City Deputy Mayor Richard Buery,” according to City and State New York.

In an interview with the site, Marinoni talked about how she started getting more involved in the LGBT community.

“My history is a little self-interested. In 1995, shortly after I came out, I opened a lesbian coffee shop/bar in Park Slope, Brooklyn. A couple years into the coffee shop, one of our bartenders was a victim of a hate crime leaving the premises. We organized some events to bring attention to it, and call for more police attention and protection for the community. Then the Matthew Shepard killing happened and we were also the same folks who had organized the marches in Park Slope, and were kind of the key organizers for some of the work that happened then. Later, when I had been dating my now-wife for many years, I wanted to be able to marry her. So she and I did some lobbying in New York state and we went up a few times to Albany and met with legislators and talked to them about passage of gay marriage in New York City,” she told the outlet.

“As an LGBTQ person, I’ve always been focused on issues across the board. I think it’s important for the LGBT community to be joining hands with other groups and issues like income inequality and education. Within this administration, I don’t work on LGBTQ issues, but I also like working for an administration which has really been so on the forefront of addressing issues in the LGBTQ community,” she added.

4. Nixon Once Called Her a ‘Short Man With Boobs’

In 2010, Nixon made headlines when she referred to Marinoni as a “short man with boobs,” in her interview with Advocate.

“She’s basically a short man with boobs. A lot of what I love about her is her butchness. I’m not saying I fell in love with her in a sexually neutral way. I love her sexuality—it’s a big part of what I love about her—but I feel like it was her. It wasn’t something in me that was waiting to come out. It was like, ‘This person is undeniable. How can I let this person walk by?'” Nixon told the outlet at the time.

“Christine would probably kill me for saying this, but my daughter said one time that if you really had to break this down, [it looks like] she would be butch and I would be femme…but really once you get to know us it’s really the opposite,” she added.

Nixon met Danny Mozes in high school. They started dating in 1988, but never got married, according to The New Yorker. Mozes works as a photographer and professor in New York.

Nixon and Mozes split in 2003. A year later, Nixon went public with her relationship with Marinoni.

“If anybody, prior to my meeting and falling in love with Christine, had asked me about what I think about sexuality, I would have said I think we’re all bisexual. But I had that point of view without ever having felt attracted to a woman. I had never met a woman I was attracted to [before Christine]. And maybe if I’d met her when I was 20, I would have fallen in love and only dated women. But maybe if I’d met her at 20, I wouldn’t have responded at all. Who knows?” Nixon told Advocate. 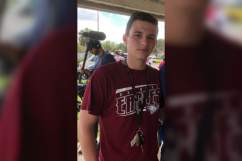