Academy Award winner Frances McDormand has an interesting family background. She was adopted by a pastor and his wife, and she says they gave her a “moral barometer.”

McDormand won an Oscar on March 4, 2018 for her portrayal of a grieving mother in Three Billboards Outside Ebbing, Missouri. The accomplished actress – who gave an unusual, exuberant acceptance speech – was steeped in a religious upbringing, and she is a proponent of adoption. She has drawn from the personalities of family members in some of her acting roles.

McDormand’s birth name was Cynthia Ann Smith. She was adopted when she was 1-years-old by Noreen and Vernon McDonald, who had taken in nine children, according to The New York Times. Vernon McDonald was a pastor with the Disciples of Christ.

The adoptive parents would move throughout the United States as part of their religious calling, and they were foster parents. The young Cynthia’s mother might have been a parishioner in the McDormands’ parish, according to The Times.

According to The Age, “McDormand’s father, Vernon, was a minister of the Disciples of Christ, an offshoot of Presbyterianism; her mother, Noreen, worked as a receptionist. Vernon specialised in remobilising failing congregations, with the result that McDormand’s early youth was spent in a succession of small Bible-Belt towns.”

McDormand told The Age of her adoptive parents, “They take in strays. They also have nine cats.” 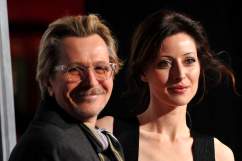 2. McDormand Has labeled Her Birth Mother as ‘White Trash’ & She Has Two Siblings

Frances McDormand in the press room at the 67th Annual Primetime Emmy Awards on September 20, 2015. (Getty)

McDormand once said she was raised white trash, but she made it clear that she was only talking about her biological mother, whose name is not clear. “My parents were not white trash. My birth mother was white trash,” reported The New York Times.

McDormand’s adoptive parents were from Canada.

3. McDormand Is Married to Joel Coen of Coen Brothers Fame

US actress Frances McDormand (R) and US director Joel Coen pose during a photocall before meeting the audience at the Rome Film Festival, on October 16, 2015 in Rome.

Frances McDormand and Joel Coen have one of Hollywood’s most successful marriages. According to AFP, McDormand told reporters that “like good movies a good marriage comes down to storytelling.” Coen, with his brother, makes up the famous Coen Brothers directing duo.

McDormand stated, according to AFP, of their successful marriage: “I think it’s having different stories to tell each other. Although we have often collaborated on films, we have both had really autonomous careers and so we have always had new things to tell each other.”

Joel Coen and his brother cast McDormand in many of their movies, most famously as the pregnant police chief Marge in their midwestern crime caper, Fargo. She won an Academy Award for that portrayal.

4. Coen & McDormand Have a Son They Adopted From Paraguay

US actress Frances McDormand, Pedro McDormand Coen, and US director Joel Coen arrive for an interview with an audience during the Rome Film Fest, on October 16, 2015 in Rome.

Joel Coen and Frances McDormand adopted their son, Pedro, in 1995. He was 6-months-old at the time. At one point, according to The New York Times, she was considering writing a book on adoption.

Pedro McDormand Coen has not gone into acting. He is a certified massage therapist and private trainer, according to Womans World.

5. Frances McDormand May Have Based Her Famous Character ‘Marge’ Partly on Her Sister, Dorothy

McDormand may have drawn from her real-life family for her iconic portrayal of Marge in Fargo. According to The New York Times, she has admitted basing Marge’s personality on her sister, Dorothy.

The Times reports that Dorothy is a chaplain at a maximum-security prison. The Times reported that the decision was probably “an unconscious choice.” McDormand is said to be close to her sister, who lives in Pittsburgh, Pennsylvania.