Giuliana Rancic is still married to her husband, Bill, despite leaving her wedding ring at home for her 2018 Oscars look. The E! News correspondent is working with Ryan Seacrest on the red carpet on March 4, but decided against wearing her wedding ring — which isn’t super uncommon — causing some chatter about the status of their marriage.

Rancic generally doesn’t wear her wedding/engagement rings when she’s on the red carpet. Sometimes, the wedding set just doesn’t work with her ensemble.

The Rancics have been married for more than 10 years.

You became my Valentine for Life almost 11 years ago @billrancic ❤️ Love you more today and forever, baby ?Happy Valentine’s Day to everyone!!! ?❤️?

Giuliana and Bill Rancic tied the knot in Capri, Italy, in 2007. The couple recited their vows at the Church of Santa Sofia. Giuliana stunned in a strapless two-piece gown, custom designed by Monique Lhuillier.

At the wedding, Giuliana’s sister, Monica, was her maid of honor. Bill Rancic’s “honorary” best man was his father, who passed away several years prior.

“I lost my father several years back and he’s the honorary best man. We’ll have a candle up there as a tribute to him,” he told People Magazine over a decade ago.

After the ceremony, the wedding’s 190 guests were transported the the lavish reception, held at the Grand Hotel Quisisana.

“After the ceremony, the couple arranged for buses to take the 190 guests to Capri’s center piazza, where dozens of Neapolitan dancers were to sing and dance alongside the guests as they walked in a group, led by the bride and groom, to the reception… The menu included local Southern Italian fare – prosciutto and two pasta dishes – followed by a vanilla and cream wedding cake decorated with red rose petals flown in from Holland,” People Magazine reported at the time.

2. They Welcomed Son Edward Duke via Surrogate in 2012

Sneaking in a bite of chocolate before lunch ?

The two have been spending their time as a family, with their only son, Edward Duke, who was born via gestational surrogate in 2012.

Giuliana Rancic had a very difficult time trying to conceive, and she and Bill decided to do fertility treatments. It was during these treatments that Giuliana’s doctor suggested that she have a mammogram — and she ended up having breast cancer. She underwent a double mastectomy and immediate reconstruction surgery.

After beating cancer, Giuliana and Bill Rancic decided to have a baby via surrogate. They were able to find someone to carry their first child, and welcomed Edward Duke the following year.

“Bill and I are blessed beyond words to welcome Edward into our lives. Thank you so much to everyone who supported us along the way. We are so in love with the little guy already,” Giuliana Rancic told E! after Edward Duke’s arrival.

The family recently enjoyed a visit to Universal Studios — and managed to have fun, despite the rainy weather. Giuliana Rancic shared the photo below on her Instagram page over the weekend.

Even with the rain, we still had the best time showing Duke @unistudios today!!! He loved everything from the Despicable Me Minion Mayhem to his Harry Potter magic wand ? So much fun!!!! #wizardingworldhollywood

3. They Recently Put Their Chicago Home on the Market

Since getting married, the Rancics have split their time between Los Angeles and Chicago. They recently decided to list their Chicago home for sale, putting in on the market for $6.8 million, according to Closer Weekly.

The 8,000 square foot home was built in 1866 and was completely remodeled by the Rancics, who are hoping to make some cash on the home, after living in it for almost four years.

“It has five bedrooms, a state-of-the-art kitchen with several Sub-Zero refrigerators, and loads of cool amenities, such as full-height wine coolers and heated floors,” Closer Weekly reported.

4. They Had Their Own Reality Show

“E! New reporter Giuliana Rancic and her husband, Apprentice winner Bill Rancic, lead a whirlwind life. She’s a TV personality in LA, while Bill is a real estate developer and businessman in Chicago. These newlyweds live in different cities, with very different lives, but still manage to make it work,” reads a description of the show on its IMDb page.

The couple decided to end the show shortly after their sone was born.

“[The show] was a very rewarding experience, but, at the same time, we needed to pull back a little bit just because our son is 4 and he was getting to an age where … I don’t know if I would have wanted to show cameras at his preschool or him going through certain milestones,” Giuliana Rancic told the Huffington Post in 2016.

5. They Wanted to Have Another Baby, But Didn’t Have Any Embryos Left After Their Surrogate Suffered a Miscarriage

Our sweet little boy is 5 today ?I can't imagine a world without you, baby boy. So blessed to call you our son. God truly created a miracle when he brought you into our lives ? Daddy and I love you forever, Duke ❤️❤️❤️

Bill and Giuliana Rancic were hoping to welcome another child into their family, to give their son a sibling. The couple previously decided to have additional embryos frozen so that they could possibly expand their family in the future.

They became extremely close to their surrogate, Delphine, who was onboard to carry another baby for the couple. Delphine got pregnant in 2014, but miscarried at nine weeks.

“Delphine is amazing. We hit the surrogate lottery when we met her. Obviously this was no fault of hers. It’s a double sadness because we didn’t want her to feel bad. And Giuliana was rather distraught at first, but she’s tough. In times like this we rely on our faith. Once the tears went away we started to look towards the future,” Bill Rancic told People Magazine at the time.

Delphine was able to get pregnant again, however, with the couple’s third and final embryo. Sadly, however, Delphine suffered another miscarriage.

“It was painful. We were so optimistic with this last embryo. We thought, ‘This is definitely going to work. This is our last shot,” Giuliana Rancic told People Magazine in 2015. 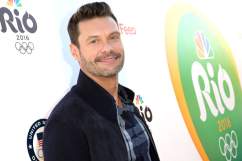