Crown Media Love Once and Always

Tonight is the first in Hallmark’s spring movie series for March and April, Love Once and Always. Tonight’s movie premieres at 9 p.m. Eastern (8 p.m. Central) on Saturday, March 10, 2018. The movie stars Amanda Schull, Peter Porte, and Vanessa Bell Calloway. After you read all about this movie and watch it, come back and share any comments or questions that you may have about the movie in our comments section below. Here’s everything you need to know about Love Once and Always.

To find out what channel Hallmark is on for you, click here to go to TV Guide’s listings. Then change the “Provider” (right under TV Listings) to your local provider. You’ll be able to scroll down to see what channel Hallmark is on for you. (To find out how to stream Hallmark’s movies live, see our story here.) If you miss the premiere, you can watch encores Sunday March 11 at 7 p.m. Eastern, Sunday March 18 at 1 p.m., Wednesday March 21 at 4 p.m., Friday April 13 at 8 p.m., or Sunday April 29 at 3 p.m.

Here’s the synopsis for the movie from Hallmark: “When Lucy’s childhood sweetheart plans to tear down the Gilded Age estate and replace it with a golf course, Lucy fights to preserve the historic mansion at all costs. As Lucy and Duncan set out to find a compromise, they learn that embracing the past may be the key to protecting the future.”

Another synopsis reads: “Lucy (Schull) is in line for a promotion as Director of London’s prestigious Museum of World History when she learns that her beloved great aunt has died back in Rhode Island. When she returns to her great aunt’s stately and beautiful estate, Wycliff House, Lucy learns to her astonishment that her great aunt left half the estate to her, and half to Duncan (Porte), whose parents were the estate’s caretakers for decades. Between their vastly conflicting plans for the inherited estate from America’s Gilded Age, a budding romance that abruptly ended ten years prior … and the issues that once again bubble to the surface between history-loving dreamer Lucy and oh-so-practical Duncan, the future of Wycliff House seems as uncertain as their relationship.”

Amanda Schull stars as Lucy. If she looks familiar, it’s because she was one of the lead stars in Syfy’s 12 Monkeys. She made her debut with the film Center Stage and also starred in the San Francisco ballet for several years. Her other credits include Mao’s Last Danger, Pretty Little Liars, One Tree Hills, J. Edgar, Suits, Devil’s Gate, and more.

Peter Porte stars as Duncan. His many credits include Cold Case, CSI: Miami, Medium, The New Normal, Parks and Recreation, The Young and the Restless (Ricky Williams), Devious Maids, Baby Daddy, Telenovela, Mom, NCIS: LA, New Girl, and more. He’s also starred in many Hallmark features including A Gift to Remember and Love at the Shore. He also toured Broadway with Mamma Mia! 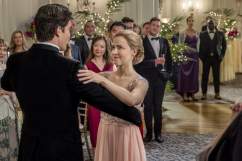 Where Was Hallmark’s ‘Love Once and Always’ Filmed? Was It Really in Rhode Island?