Tonight is the 2018 iHeartRadio Music Awards, honoring achievements in music from the past year. DJ Khaled and Hailey Baldwin are hosting the big event and Baldwin recently dished to People about her hosting gig, saying that, “I’m so excited to be co-hosting this year’s iHeartRadio awards alongside someone as hilarious and talented as DJ Khaled. I’ve always been a fan of iHeartRadio and am looking forward to a great show filled with some of the most incredible artists who I myself am a fan of too.” Check out all the info on what to expect, from the performers, to what time the show airs, to what channels feature the show. Read on for the details.

TV CHANNELS: The iHeartRadio Music Awards air on three networks. TBS, TNT, and TruTV are all featuring the show.

LIVE STREAM: The iHeartRadio Music Awards are available via live stream and you can find your streaming options here. The red carpet pre-show will air at 6:30 p.m. ET on the iHeartRadio Facebook page.

PERFORMERS: Performers for tonight’s big event include Ed Sheeran, Charlie Puth, Maroon 5, Bon Jovi, Camila Cabello, Cardi B, Eminem featuring Kehlani, N.E.R.D. and G-Eazy. In an interview with People, DJ Khaled dished on the event saying, “iHeartRadio is a huge supporter of artists and music, so to get to be part of this celebration is a huge honor. It has been an extraordinary year in music and I couldn’t be more excited than to be celebrating these amazing artists with all of their fans nationwide.”

AWARD RECIPIENTS: In addition to the regular nominees, Chance the Rapper will pick up the 2018 innovator award for his “groundbreaking accomplishments in music” and charitable contributions. Camila Cabello is also accepting the fangirls award presented by L’Oréal Paris and iHeartRadio. This year, Bon Jovi is taking home the first-ever iHeartRadio Icon Award at the show.

ADDITIONAL INFORMATION: Taylor Swift is premiering the music video for her single “Delicate” and she is nominated for eight awards including Female Artist of the Year. The awards show will also air live on iHeartMedia radio stations nationwide. According to Us Weekly, there is a new awards category this year and it’s called Cutest Musician’s Pet. The nominees for this include Katy Perry, Swift, Miley Cyrus and Ariana Grande. 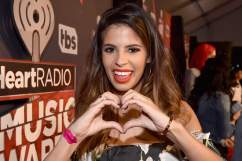