The 2018 iHeartRadio Music Awards air tonight, with DJ Khaled and Hailey Baldwin hosting the event. The show airs from 8 – 10 p.m. ET/6 – 8 p.m. PT on the channels TNT, TBS and TruTV, with an encore presentation airing on TBS at 11 p.m. ET/PT. The awards show honors the year’s most popular music artists, along with their fans. It also features performances from some of the biggest musicians in pop culture today. For those who don’t have cable or cannot get to a television, but want to watch the iHeartRadio Music Awards by using some of the official live stream options, you can watch a live stream for the awards online. You can watch the show on your phone via another streaming device, using one of the following cable-free, live-TV streaming services. They each cost a monthly fee but they also are each available with a free trial, allowing you to watch tonight’s awards show for free:

DirecTV Now: The TBS and TNT networks are included in all four of DirecTV Now’s base channel packages, which range from the costs of $35 to $70 per month. You can easily sign up for a free 7-day trial no matter which package you choose and you can watch the networks on your computer by using the DirecTV Now website, or on your phone, tablet or streaming device via the DirecTV Now app.

Sling TV: TBS and TNT are each included in both the “Sling Orange” and “Sling Blue” channel packages for Sling TV, which cost either $20 or $25 per month. Viewers can sign up for a free 7-day trial and you can watch live TV on your computer via the Sling website. You can also watch it on your phone, tablet or streaming device via the Sling TV app.

For those who already have Sling TV or would like to try a 7-day free streaming trial and are interested in watching the awards show, not only will you gain access to TNT and TBS channels, you will also be getting access to a wide range of cable channels as well. These include ESPN and CNN also, so Sling TV is a good way to go.

When it comes to the red carpet arrivals tonight, the 2018 iHeartRadio Music Awards Red Carpet Show is airing on the iHeartRadio Facebook page, starting at 6:30 p.m. ET. According to People, iHeartRadio will also feature footage from the red carpet and awards show via its social media accounts and using the hashtag #iHeartAwards.

Some of the entertainers who are performing at tonight’s awards show include Eminem, Camila Cabello, Ed Sheeran, Maroon 5 and Jon Bon Jovi. Taylor Swift will also be premiering her brand new music video, titled “Delicate”. At a previous awards show, when she premiered a new music video, she was not present to announce it. Fans will have to wait and see if she shows up tonight. 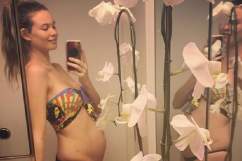