Academy Award winner Frances McDormand gave an exuberant speech when she accepted the best actress Oscar, but one of her comments is getting particular attention. McDormand said there were two words she wanted people to remember: Inclusion rider.

“I have two words to leave you with tonight, ladies and gentleman: Inclusion rider,” McDormand said, carefully enunciating each word. The term quickly became the Twitter hashtag #inclusionrider.

Want to learn more about the #InclusionRider? Here’s why we need it and what it is. From the people responsible for it: @KalpanaKotagal @fanshen @Inclusionists. Contact us to learn more. @THR @Variety @latimes pic.twitter.com/uAl42sIZgJ

This came after the Three Billboards Outside Ebbing, Missouri star had urged all women in the audience to stand up and be recognized. Many, although not all, did. The unusual speech had many people wondering what Frances McDormand was talking about. What is an inclusion rider?

Frances McDormand at the Oscars.

For the non-film contract fluent folks, Frances McDormand closed with “inclusion rider,” likely meaning put diversity requirements in your contract about the other crew/artist positions throughout a film you attach yourself to. #Oscars

Whitney Cummings, director, co-writer, and star of The Female Brain, explained on Twitter, “an inclusion rider is something actors put into their contracts to ensure gender and racial equality in hiring on movie sets. We should support this for a billion reasons, but if you can’t find a reason to, here’s one: it will make movies better.”

Uproxx notes that, in inclusion riders, the celebrity can specify the diversity percentages mandated. “In other words, actors and actresses can for specific diversity initiatives, like for the crew to be 50% female or that speaking roles in a film reflect the demography of the setting of the story,” the site reported.

Here’s the video of McDormand making the comment about inclusion rider (which some people mistakenly though was “inclusion writer”:

Best Actress Frances McDormand asks all the female nominees to stand at the #Oscars, calls for an inclusion rider https://t.co/RuqvtKMvWx pic.twitter.com/jbFHN4kHrT

McDormand is not the first person to use the term. According to The Guardian, “The concept was explored in a TED talk in 2016 by Stacy Smith. Having examined the data on diversity in US-produced films, which showed that casting was not representative of the population, she suggested that an ‘equity clause’ or an ‘inclusion rider; could be part of the solution.”

Others caught on right away as to the meaning, sparking a Twitter trend and spurt of positive applause for McDormand on social media.

An “inclusion rider” is a clause in an actor’s contract that requires the cast and crew be diverse in order to retain the actor. That’s kind of a brave thing to say on such a big stage.

An "inclusion rider" is contractual language that promotes racial & gender parity in casting / employment throughout a film. The call is to leverage your signing power to get more folks the opportunity to sign on. #inclusionrider #Oscars90#Oscars #RepresentationMatters

The McDormand moment was the fitting culmination in a year of #metoo and gender empowerment. Essentially, by urging inclusion riders, she was challenging Hollywood’s actors and actresses to use their fame to leverage actual change when it comes to inclusiveness in film. Many people on Twitter applauded McDormand for taking such a stand. Words are one thing, but using star power to demand contractually mandated change is another.

There were other female empowerment moments during the Oscars too, but McDormand’s stood out because of the way in which she threw down the gauntlet and urged specific action. Many people felt that McDormand’s comment was the most memorable moment of the evening. Of course, McDormand has made a career out of playing tough as nails, gritty female heroines.

FRANCES MCDORMAND. You are an inspiration. She deserved that award and I literally jumped off the couch when she won.

Frances McDormand PREACHING feminism and getting down to brass tacks and I am HERE FOR IT. #inclusionrider #oscars

You can learn more about Frances McDormand’s family background here: 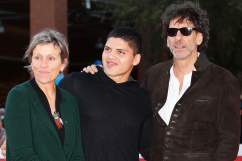