If you’ve finished Jessica Jones Season 2, you may already be wondering when to expect Season 3 to be released on Netflix. Netflix is notorious for not announcing a new season too soon after the most recent season has been released. Here are all the details we know about Season 3 so far. This post will have spoilers for Jessica Jones Season 2.

So if past patterns hold up, it will be one to three months before we hear if Jessica Jones is getting renewed for Season 3 (which it likely will.) In fact, maybe Netflix will just wait until Comic-Con this summer, like it did for Daredevil Season 3. On a side note, it looks like Defenders may not be coming back for a second season. But that’s not a reason to doubt we’ll see more of Jessica Jones.

2. Netflix Has To Release A Lot of Shows Before ‘Jessica Jones’ Returns

As far as a return date for Jessica Jones, you’ll likely be waiting quite a while. We’ll likely have to see The Punisher Season 2, Luke Cage Season 2, Iron Fist Season 2, and Daredevil Season 3 before we finally get Jessica Jones back. And remember, Jessica Jones Season 2 premiered in March 2018, while Season 1 premiered on November 20, 2015. That was a really long wait.

Den of Geek has estimated that we might see Jessica Jones return in November 2019, which would be a lot faster than Season 2.

It’s likely that Season 3 will continue hunting down IGH, the company that experimented on Jessica and gave her powers. And it’s likely that we’ll see another appearance by Kilgrave. Now we know that part of his consciousness (or some residual of him) is somehow in Jessica’s brain. He said he would come back if she needed him. So it’s hard to imagine that the producers wouldn’t take the opportunity to bring him back again, even if it’s just for one more episode.

4. Trish Will Likely Have a Big Storyline in Season 3

It’s a pretty safe bet that Trish will have a big storyline in Season 3. She was a huge part of Season 2, but the way the series ended, we have a lot of questions left to answer. At the end of the season, she had tracked down Dr. Karl and got him to experiment on her, just like he did Jessica. She wanted superpowers. But Jessica interrupted the surgery, so it looked like Trish’s dream wasn’t going to happen. However, at the very end, she displayed super fast reflexes when she caught her phone with her foot, and she paused, realizing this wasn’t normal for her. We’re likely going to see a big exploration of her new powers and whether she handles those changes as well as she thinks she can.

5. Fans Are Already Excited About Season 3

While we’re all waiting for news about Season 3, fans aren’t shy about sharing their excitement about Jessica’s story continuing. Here are some of the things they’re saying.

Ready for #JessicaJones season 3 to come out now!

jessica jones broke me. when is season 3 coming out 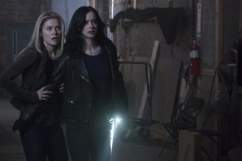 POLL: Who Was the Worst Character on ‘Jessica Jones’ Season 2? Was It Trish?