Jhene Aiko, a Grammy-nominated singer known for her ethereal voice, is caught up in a possible romantic entanglement with Big Sean and Nicole Scherzinger.

Aiko, a singer-songwriter, is described as “a mix between a young Sade and a female Frank Ocean.” She’s known for her music, her relationships, her exotic beauty, and family tragedy.

Guam! what a beautiful crowd u were! thank you for your time ??i got the craziest sunburn of my life out there, but i still love you ?

The website Jasmine Brand got people talking with a post alleging that there was trouble in paradise for Jhene Aiko and Big Sean. The website claims that Big Sean and Nicole Scherzinger were spotted together at an Oscars party.

“Both attended an Oscar Awards after-party together and were cozied up together sitting at a table in VIP,” alleged Jasmine Brand, although the information is not confirmed.

sorry, but nothing about you guy's fan fiction stories are true… I still love you tho ?

the internet is a wild place ? it's a whole other reality. bless the internet. amen.

The allegations soon went viral on social media, and people unloaded anger against Big Sean on Twitter. The website alleged that Jhene found out about the rumors, grew upset and confronted Big Sean about them. Time will tell whether the stories about relationship trouble prove true or not. According to Perez Hilton, Aiko is not following Big Sean on Instagram. 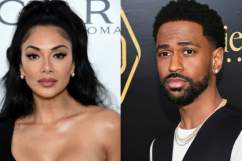 2. Jhene Is a Grammy Award Winning Singer Who Released a Song With Big Sean

Jhene Aiko’s music career started at just the age of 12. According to the website JheneAiko.net, at that young age “she inked a deal with Epic Records. She contributed her vocals to several tracks on the R&B group B2K album, B2K: The Remixes – Volume I. She was their opening act on their Scream Tour 3. She also appeared in many music videos, including O’Ryan’s debut video Take It Slow.”

Her career only progressed from there. “By the age of 15, Jhene Aiko’s self-titled solo album was set for release, but because of creative differences with her record label Epic, she asked to be released,” the website says. She worked as a law firm receptionist and at a vegan restaurant.

EOnline describes her as an R&B artist who “created a buzz when she popped up on tracks with Drake, Kanye West, Big Sean and more in recent years, which continued even further when she dropped her debut LP, Sail Out in November 2013.” Her single “Beware” made the top 40 Billboard hits list.

She told The Los Angeles Times, “When I was born, my grampy gave me the nickname Penny. Penny is me in my purest and most authentic form. Since 2012, I’ve been trying to get back to her. And through this process of making music, I’ve been rediscovering her.” Musically, she admires Tupac Shakur, Aliyah, Rapper Kid Cudi, and Eminem, among others.

Her official website contains links to her book of poetry. She is known as “Lil’ Fizz’s cousin,” but, according to IMDB, they are not related, and “it was used as a marketing tool suggested by Sony/Epic to promote her through B2K and to attract an audience.”

3. Jhene Aiko Is Divorced From Oladipo Omishore & Has a Son With Singer O’Ryan

In 2017, Aiko filed for divorce from Dot da Genius (Oladipo Omishore). According to EOnline, she cited “irreconcilable differences” for the marriage ending. They married in 2014, the entertainment site reports.

According to IMDB, Aiko has “a daughter with singer O’Ryan (Omarion’s brother) named Namiko Love Chilombo-Browner, who was born on November 19, 2008.”

4. Jhene’s Father is a Pediatrian & Her Brother Died of Cancer

Jhene Aiko has a very interesting family background. According to the JheneAiko.net website, “Jhene Aiko’s ethnicity is that of Japanese, African American, Spanish, and Native American descent. Her father, Dr. Karamo Chilombo (birth name Greg Barnes) is a pediatrician, and her mother is Christina Yamamoto. She has two older sisters named Miyoko and Jamila. Her brother Miyagi died in July 2012 after a two year battle with cancer.”

Jhene’s childhood in Los Angeles was marked by unrest. “Jhene Aiko grew up in a middle class family on Rodeo and LaBrea,” the website says. “At times life felt very real, since they lived a few blocks from a blighted neighborhood. She vividly recalls the L.A. riots when everything was on fire where they lived. As the family drove up the hill in LaBrea to her grandmother’s house, she looked back and thought the world was coming to an end.”

Instead, she poured her feelings into words. “She enjoyed writing essays in school and even kept a diary. At one point, she even thought about becoming a food editor because of her love for food,” the website says, noting that she ended up putting her feelings into music instead.

Of Miyagi, her brother, the website says, “When Miyagi learned that he had a brain tumor he turned to Buddhism. Despite his illness, he was always in good spirits. He would never let his friends know that he was sick. It turned out to be an inoperable brain tumor. He was ill for two years and fought the good fight.”

Jhene’s brother’s death affected her deeply. “Since my brother’s passing, I’ve been trying to navigate through my feelings,” she told The Los Angeles Times. “I distracted myself by keeping myself busy … and trying to escape to peaceful places, by any means necessary.”

5. Aiko’s Sisters Were in an R&B Group & Her First Name Derives From an Ethiopian Word

they call me mellow yellow ?

Aiko’s sisters Miyoko and Jamila “were in the R&B group, Gyrl. They toured with Immature, who were signed to MCA/Silas Records,” Latina.com reports. According to Youth Village, this connection was instrumental in Aiko’s early career. “This led to Jhené’s first meeting with producer Chris Stokes when she was five years old, and eventually he heard her sing,” the site notes.

According to Latina.com, Aiko’s full name is Jhené Aiko Efuru Chilombo. “The singer’s first name is derived from the Ethiopian name Ghenet, which means ‘Paradise’ or ‘Garden of Eden,'” the site reports. “Aiko is her middle name and in Japanese means ‘little loved one.'”