John Legend’s real name is John Roger Stephens, which isn’t something that many people realized. In fact, social media lit up on Thursday, March 22, after finding out that Legend’s last name isn’t actually “Legend.” Not unlike other celebrities, the “All of Me” singer uses a stage name.

The discussion kicked into high gear after someone on Twitter asked why some women choose to keep their maiden names after getting married. The original tweet was posted back in August 2017, but was reignited when Chrissy Teigen commented on it earlier this morning.

“I’d really like to hear the reasoning behind women who won’t take their husband’s last name,” the original tweet reads.

Teigen, who married Legend in 2013, decided to respond, making a joke about her husband’s “last name.”

“My husband didn’t even take his last name?” Teigen tweeted. This caused many people to start searching the internet to find out if John Legend’s last name is really “Legend” (alas, it is not). Shortly after, more and more people started wondering why Teigen — who is pregnant with her second child — did not change her last name after tying the knot.

Another Twitter user was quick to call Teigen out, wondering why the question wasn’t answered.

Teigen wasn’t about to let that slide by, either. She was quick to clap back at the Twitter user to let the world know that she didn’t change her last name legally to Stephens simply because she didn’t “want to.”

“You’ll never understand the simple reason of ‘because I don’t want to’?” Teigen tweeted in direct response. Teigen is among millions of women who choose to keep their maiden name after marriage. For many, it’s a personal decision that has to do with one’s identity. For others, it is a professional decision.

So, how did John Legend actually settle on his “stage” name? According to the New York Times, the name “Legend” was given to John by his friend, J. Ivy, when he first started out in the music business. Ivy started calling him “John Legend” because of his “old-school sound.” For John, the name just stuck and he decided to roll with it. He was definitely aware of the meaning of the word “legend,” but decided to live up to the name rather than shy away from using it.

“It was bold and I knew people would be like ‘He’d better be good if he’s going to call himself John Legend. So I said, ‘Let me go out and make the best music I can and maybe, after my career is over, I’ve lived up to the name,” Legend told the New York Times back in 2006.

Legend and Teigen’s daughter, Luna, has her dad’s “real” last name (Luna Simone Stephens). The couple is expecting a baby boy in the coming weeks. It is presumed that their son will also be given the last name “Stephens.” 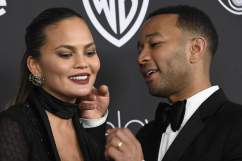