Trevor Holmes stole Katy Perry’s heart during his audition on American Idol and Perry almost stole Holmes away from his girlfriend, Sierra Nielsen. Nielsen and Holmes’ mother were waiting outside the room during Holmes’ audition and they tried to listen in, but couldn’t hear much of what was going on inside. When Holmes first walked in, both Luke Bryan and Katy Perry told him he was a “dreamboat.” Perry couldn’t control her flirting and Holmes was loving every second of it.

Holmes gave the judges some of his background, telling them that he works in construction to help support his mother, who has Lupus, and he is also a part-time songwriter. Perry then exclaimed that he was so hot. During his audition, Holmes admitted to Perry that he’s had a crush on her for years and Perry was overjoyed. The two locked eyes and shared a moment.

Holmes ended up getting the golden ticket to Hollywood and the judges got out of their chairs to congratulate him. Appearing on Good Morning America after the audition aired, Holmes said that performing in front of his celebrity crush, Perry, was pretty surreal. As Perry made her way over for a hug, Nielsen ran passed her and planted a huge kiss on her man, having no idea that she had cut off Perry, according to what Nielsen said on GMA. Nielsen joked that she told Perry they could share Holmes. She also revealed that she and Perry got to share a hug as well.

Nielsen said that when Holmes performed a second song, which was dedicated to Nielsen, that part of the audition did not make it to air. The performance that was shown was of “In Case You Didn’t Know” by Brett Young. When Nielsen and Holmes’ mom rushed into the audition room, Nielsen said she had no idea about the flirting that went on, but she said on GMA that she fully supports her man and that everyone has celebrity crushes. Nielsen joked that, “I was fully supportive of it [the flirtation]. We all have celebrity crushes. We had so much fun and Katy and I hugged and we laughed about it and I even told her, ‘We can share him.'”

Lionel Richie held Perry back as Holmes embraced his girlfriend at the end of the audition and after Holmes left the room, Perry said, “If you love it, let it go and then it will come back and marry you.”

Though Holmes may have a little crush on Perry, he appears to take his relationship with Nielsen very seriously. Recently, he posted a video on his Instagram account, serenading Nielsen with the help of a couple of fellow Idol singers. With the video, Holmes wrote, “When you love someone there’s nothing you wouldn’t do to see them smile. It’s so important to go out of your way and let them know how much you appreciate them. So what do you do when you make friends with some of the best singers in the world?? You ask them to back you up on vocals in a surprise serenade for your woman. @sierranielsen you are are the one who taught me that fear is normal, but you must face It. To conquer your fears you must run at them full speed. Thank you for believing in me and giving me strength to face my fears. I want to thank my good friends @thaddeusjohnsonsings @willcasanovadc you guys are so incredible. Not gonna lie, my favorite part of this video is @davis_noah face.” Below you can take a look at the adorable clip.

As Holmes enters Hollywood Week, he has written the following message on his Instagram account, “Hollywood Week airs tonight!! Hands down one of the most insane experiences I’ve ever had in my life. I wouldn’t trade it for anything. You’re gonna have to tune in at 8/7c to see what happens. I love and appreciate all of you guys. I feel like I have an army behind me.” Tune in to catch Katy Perry’s Idol crush in action. There’s no news as to whether or not Holmes moves beyond Hollywood Week. 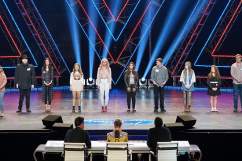