On tonight’s season finale episode of Keeping Up With the Kardashians, Khloe Kardashian is reveals the gender of her baby to be … a girl!

The official title of tonight’s episode is “The Gender Reveal” and the synopsis of it reads, “The girls take one last sister getaway to San Francisco before their babies arrive, but they quickly tire of Kourtney’s bad attitude; Kim wants to include her family in the surrogacy process; Khloe anxiously awaits news of her baby’s gender.” So, fans will finally find out that Khloe is having a daughter, though Khloe felt she was definitely having a boy.

There have been multiple reports that Khloe is having a boy, but there has also been some speculation that she was having a girl.

According to People, a source has said that Khloe has only been registering for pink and neutral colors for the baby. An insider told People that, “Early on, Khloé was telling people that she is expecting a baby boy. But getting ready for her baby shower, she is only registering for pink and neutral colors. There is no blue at all on her registries.”

Khloe is having a baby with her longtime boyfriend, Tristan Thompson, and when it comes to baby names, she said on The Ellen Show that she’s all set with a boys’ name. So, does this mean she’s having a boy? Khloe stated, “I think if it’s a boy I’ll go with Junior — Tristan Jr. Then for a girl, I don’t know where to begin.” According to Cosmopolitan, it was been reported that Khloe and Tristan’s baby is, indeed, a boy.

? What’s meant to be will always find its way ?

Cosmopolitan has reported that Khloe is supposed to be due in April 2018, so fans will soon get to meet her first little one. ET Online has also stated that Khloe is having a boy (thought she’s having a girl) and that after the baby is born, she and Tristan will be living in both Cleveland and Los Angeles, splitting their time between the two cities. A source told ET Online that, “Khloe isn’t as tied to L.A. as her sisters. She’s lived in other cities before and she’ll do it again. They’re both going to travel to be together whenever possible. It will not be a long-distance relationship … They’re going to be very hands-on parents. They’ll be great.” Tristan already has a 1-year-old son with his ex-girlfriend, Jordan Craig, who was born during the beginnings of his relationship with Khloe.

The Kardashians have had quite the baby boom in the family over the past few months, with Kylie Jenner revealing that she was actually pregnant and that she gave birth to her daughter, Stormi Webster, in early February 2018. Just a few weeks before that, Kim Kardashian-West welcomed her third child, daughter Chicago West, via surrogate. And, on a recent episode of Keeping Up With the Kardashians, eldest sister Kourtney has been considering freezing her eggs in case she wants more kids in the future. Now, the only Kardashian/Jenner who hasn’t popped out a kid is Kendall Jenner, who is on the fast track to a high-fashion life, as a top model. 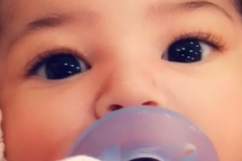 Read More
Celebrities, Keeping Up With The Kardashians, Khloe Kardashian, Reality TV, TV
KUWTK fans want to know about Khloe Kardashian's gender reveal. Is she having a boy or a girl? Read on for spoilers on what the reports say.