Beware of major Bachelor spoilers in this post. If you do not want any details on Burnham’s relationship status with star Arie Luyendyk Jr. or the After the Final Rose special, STOP READING NOW.

Last night on the finale, it was revealed that Luyendyk broke up with season 22 winner Becca Kufrin in order to pursue the possibility of getting back together with runner-up Burnham. Reality Steve previously revealed that, “A couple days after the premiere, I was given word that Arie called Lauren on the night of the premiere. Certainly an interesting thing to be told because why would a lead possibly contact the girl he dumped when he’s engaged to someone else? … Started hearing that Arie was having second thoughts about Becca and thinking he might’ve made the wrong choice.” After the airing of the finale, Cafe Mom reports Kufrin admitting that she wished Luyendyk had never proposed. She explained that, “He did get down on one knee, he did propose to me, he did say, ‘I’m committing to you, I choose you every day.’ That’s something that I only wanted to happen once in my life, and it’s been robbed from me, and I can never have that one-time moment again. And the second part is that he lied or hid his true feelings and emotions for weeks and weeks and weeks. The number one thing that I value in a relationship is honesty and loyalty, and I feel like I wasn’t given that.”

So, with Luyendyk telling Kufrin he was still in love with Burnham and wanted to be with her instead, what happened next? In a post made by blogger Reality Steve, Steve said, “I was told from a source specifically that ‘Arie broke up with Becca and they are heading to Virginia to film’ … ABC’s vans were out in front of Lauren’s mother’s house in Virginia, and the person who posted the picture seemed to know that ABC and Arie were there and were filming … Arie ended his engagement with Becca a little over a week ago and is now dating Lauren. That’s why he was in Virginia last week at Lauren’s parents house.” With Luyendyk appearing at Burnham’s house in hopes of winning her back, it makes you wonder what her parents think of the situation as a whole, especially since Burnham reportedly took back Luyendyk.

When Luyendyk knocked on Burnham’s family’s door, he was greeted with a huge hug from Burnham. Luyendyk let the cameras know that he had already told Burnham on the phone that he had broken up with Kufrin. During their time apart, after her rejection, Burnham said she had just really needed to be around her family.

During the hometown dates, fans got to know Burnham’s family and they all had their concerns. Burnham comes from a military family and things were tense with Luyendyk at first. Burnham’s father seemed intimidating, but after speaking with Luyendyk, he wasn’t so tough with him. Burnham’s mother, on the other hand, told Luyendyk that she had concerns and was very nervous about the situation. She worried Luyendyk would hurt her daughter and she was right. So, it must have been difficult for Burnham’s parents to deal with Luyendyk breaking her heart and then begging for her to get back together just weeks later.

Burnham’s father, David, is a retired Navy commander who is also the CEO of the CAVU International consulting firm, according to Pilot Online. As for her mother, Pamela, she works as a private nurse consultant. 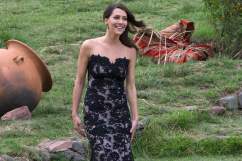 Becca Kufrin Is the New Star of ‘The Bachelorette’ 2018

Read More
Reality TV, The Bachelor, TV
On The Bachelor 2018 this season, Lauren Burnham's family has reacted to Arie Lueyndyk Jr. What has her mom and dad had to say?