Roseanne Barr and her fellow cast members have returned with a reboot of the sitcom that made her a true pioneer in television. One aspect of the show that became a running joke was the revolving door when it came to the character of Becky, Roseanne Conner’s eldest daughter. Alicia “Lecy” Goranson was the original Becky Conner, and Mental Floss reported that the actress decided to leave the series at the end of season 4 in order to attend Vassar College. Not too shabby for a Conner, right?

When talking about her exit from the show, Gorancon told Huff Post Live that, “At the time, I wanted normalcy. I wanted to be around my peers. I wanted to be in an intellectual environment … I would have, like, five English papers due on Monday, and they’d want me to fly to Disney World and shoot a show there over the weekend, and I said, ‘I just can’t feasibly do this.'”

At one point, there was speculation that Goranson was sexually harassed by a member of production and that was the alleged reason for her departure at the time. Whatever the case, Goranson was replaced by actress Sarah Chalke, who many also know from the hit show Scrubs. During various episodes of the show the two would sub in for each other and the other characters would make jokes, letting viewers know that they’ve acknowledged the switch-up. According to Simple Most, Goranson returned for season eight of the show, but then she left for the ninth season, with Chalke resuming the role again. When Chalke reflected on her job with Roseanne, she said that, “I was called ‘Second Becky’ for 10 years on [my next TV job], Scrubs. It was crazy, I was 16 years old. I watched the show, I loved the show. I couldn’t believe how ridiculously funny and talented [the cast] was.

With the reboot in full swing, fans were wondering what would happen and they should be pleased to know that both Beckys are back, but there’s a catch. Goranson, the first Becky Conner, will resume her original role, while Chalke will return as a new character named Andrea. According to Entertainment Weekly, Andrea hires Becky to be her surrogate, which leads to some drama with the Conner family.

The character of Andrea is actually Chalke’s third role on the show, according to Simple Most. Previously, she appeared as a trick-or-treater on the Halloween episode in season eight. 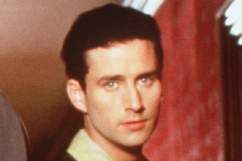