Ryan Seacrest is a staple on the red carpet and American television. Recently, however, he’s been accused of being a sexual predator, as a former wardrobe stylist accused him of sexual misconduct, according to Us Weekly. Among some of the alleged incidents claimed by Suzie Hardy were that Seacrest “shoved her head near his crotch and repeatedly hugged her in his underwear.” Seacrest has publicly denied the claims twice. Most recently, Seacrest’s official statement was this:

Variety published a salacious story that revealed the specific claims against me for the first time — even though an independent third-party investigator found insufficient evidence to support the claims. Much to my dismay, Variety didn’t speak with me or bother to speak with other credible witnesses or even ask for any of the evidence that was obtained during the investigation when offered, all of which clearly challenged the veracity of the claims made against me … I don’t want to accuse anyone of not telling the truth but in this case, I have no choice but to again deny the claims against me, remind people that I was recused of any wrongdoing, and put the matter to rest.

The E! network has come to Seacrest’s defense, saying that there was insufficient evidence to prove Hardy’s claims, according to Deadline. E!’s statement reads:

E! has now concluded the investigation into allegations regarding Ryan Seacrest. The investigation, conducted by outside counsel, found insufficient evidence to support the claims against Seacrest and therefore could not be substantiated. E! is committed to providing a safe working environment where everyone is treated with respect and dignity.

One person that has been by Seacrest’s side throughout the allegations, is his longtime girlfriend, model Shayna Taylor. Just four days ago, Taylor took to Instagram to react to the claims in a dedication to Seacrest. Taylor wrote:

I love you so much Ryan. You are the most respectful, well mannered, civil, gracious, loving, kind human being. I have known you for 6 years and every day you impress me with your kindness. Not only to me or your friends and family, but most importantly in your work environment. You have worked SO hard to be where you are and you deserve it. #iloveyou #foreversupportyou #teamryan #teamseacrest.

This morning, Taylor also wrote words of encouragement to her man, who is set to conduct interviews on the red carpet at today’s Oscars. Taylor wrote on Instagram:

To a day that should be like any other day – let your goofy, charming spirit shine through. Without you TV would be pointless to watch. The people that know you, and honor you know the truth – and the truth always prevails. #iloveyou #teamseacrest.

Seacrest and Taylor first started dating in 2013 and broke up for a period of time, before getting back together. The two now live together on both coasts, though Seacrest spends the majority of his time in New York City since he took on his morning gig for Live! With Kelly and Ryan. Co-host Kelly Ripa, who Seacrest openly calls his “work wife”, also backed Seacrest live on their morning show. Ripa gushed over Seacrest live on-air, telling him:

I just want you to know, you are a privilege to work with and I adore you. I know what a professional, great person you are, and I feel very, very blessed to work with you each and every day.

There are multiple reports that celebrities may avoid speaking with Seacrest on the red carpet because of the allegations. Some publicists have urged their clients to steer clear. 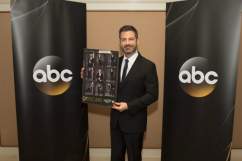 Read More
Celebrities, Oscars, Ryan Seacrest, TV
Ryan Seacrest has been dealing with allegations of being a sexual predator and his girlfriend Shayna Taylor has addressed the claims in the media.