Becca Kufrin had her heart broken by Arie Luyendyk Jr. on The Bachelor 2018 and with that, the new star of The Bachelorette was made. On the After the Final Rose special for The Bachelor, Kufrin’s broken off engagement was revisited and she was announced as the new Bachelorette. She also got to meet several of her potential suitors, which gave viewers a glimpse at what to expect from some of the new cast members. And, according to Reality Steve, a few more of the contestants have been revealed, as filming has already begun. Bachelor bigwig Mike Fleiss has also started tweeting out behind-the-scenes photos from production and you can check out a pic of some of the contestants sitting around in the below Twitter pic.

From some of the behind-the-scenes pics of the limo arrivals and tweets, this is what we know so far about the contestants on night one. During the limo arrivals, one contestant supposedly shows up just wearing a vest, with no shirt or jacket. Another one is dressed up in a chicken suit. Hey, there’s always at least one person in a costume, right? And, according to Just Jared, one of the first group dates of the season is at a trampoline park, with all the guys decked out in neon. Reality Steve spoiled that the date was a game of dodge ball. Recenty, Kufrin appeared on The Ellen Show and revealed that her celebrity crush is Good Morning America co-host Michael Strahan. She also said that if he showed up as a contestant, it would be a very short season. Unfortunately for Kufrin, Strahan is not a contestant. But, are plenty of eager men to choose from on the show. Get to know the men who have been revealed so far …

Adim originally hails from Nigeria, but he grew up in the UK and was able to show off his accent on the After the Final Rose special. He also told Kufrin that it was his birthday on the night they met. Currently, Adim lives in Kentucky and his Facebook profile is under the name “Johnqe Adamlioqw”. From the looks of some of his online photos, Adim is definitely into fitness. According to Adim’s Linked In account, he is a Cloud Appplication Account Executive at Oracle and in 2016, one of his co-workers, Nick Tassinari, described him as this: “Lincoln always brought enthusiasm and strong initiative into the office. He is polished, professional, and great with customer interactions. Lincoln has unmatched energy and drive. I think Lincoln would be a great asset to any organization and I would highly recommend him to any sales team.”

New Wave @estudios_official – you did that!!!

Reality Steve has confirmed on Twitter that Colton Underwood is one of the contestants this season. After a fan spotted him in behind-the-scenes photos, Steve said that it’s the same Underwood who dated Olympic gymnast Aly Raisman. Underwood is also an athlete, as he is an American football tight end, but currently, he is a free agent. On his Instagram profile, his quotes and self-description read, “Star recruit turned 2 time All-American. Former NFL try hard. Legacy foundation. Decent Human Being. I’ve never met a dog I didn’t like.”

Chase Vergason hails from Winter Park, Florida and he previously played for the Gamecocks baseball team, according to The State. Vergason works in real estate marketing and he is currently the CFO at Vergason Sojourner & McWaters. When he appeared on the After the Final Rose special, Vergason was refreshingly nervous and blown away by the live audience. According to some of his social media photos, Vergason enjoys the outdoors, especially hunting and fishing.

I can’t wait until April when I dm slide into banjo-playing Bachelorette contest Ryan pic.twitter.com/QHwvJOvfU9

Ryan Peterson is the adorable banjo-playing singer from the After the Final Rose special. In addition to warming the hearts of women across America, Peterson also enjoys time on the water. He currently lives in Manhattan Beach, California and his Linked In profile states that he works as a Landscape Designer and Contractor at GreenPro Direct. He also has quite the support system in his sailing life, as friends recently tweeted, “Just want to send a hearty good luck to Ryan Peterson from his Shipyard crew at Boston Harbor Shipyard. There’s a about 20 of us here so stoked for him. Reach out anytime for a lil Beantown loving for RP!!!” According to Peterson, he’s “here for the right reasons”, when The Bachelorette is concerned.

Darius Feaster was one of the men who appeared on the After the Final Rose special as well. He’s originally from Wisconsin, but currently resides in Los Angeles, California. According to his Linked In profile, Feaster works as a Sales Representative at Allergan, but his social media pics show that he also dabbles in modeling a little bit. On Linked In, Feaster describes himself as determined, passionate, analytical, inquisitive, fun-Loving, selfless and strategic. The UW Badgers has reported that Feaster also previously played football in college.

Welcoming Nick Spetsas to the firm! Nick is a 2nd year law student at USC & will work beside Kenny as our law clerk. pic.twitter.com/NRBCvIHFx4

Nick Spetsas was reported to be a contestant for this season by Reality Steve and he currently works in Orlando, Florida as an attorney with the Eraclides, Gellman, Hall, Indek, Goodman, Waters & Traverso firm. In college he was also a swimmer. Reality Steve previously revealed that Spetsas’ ex-girlfriend, Stephanie, announced the news that he was on The Bachelorette online and she is reportedly cheering him on in his journey to find love.

Reality Steve has reported that a man named Blake Horstmann is a contestant on the show as well. He hails from Colorado and some may recognize him as the cast member who showed up on the After the Final Rose special on a horse. When he’s not riding horseback around a TV studio, he works as a sales rep for Coors. His Instagram profile is set to private, like most of his fellow contestants, and his tagline says that he’s “probably out of town.” On his Linked In account, Horstmann describes himself as this: “I am a young, motivated, overachieving, marketing and communication degree holder with a passion for learning. I am not afraid of and enjoy learning new things and love a good challenge. I am continuously striving for success and perfection in everything I do … I enjoy hanging with family, friends and anybody I can learn from. I do not shy away from a competitive atmosphere and strive in a culture that is upbeat and progressing.” Horstmann then added that, “I take life one step at a time and enjoy the little things.”

Vandevanter is an electrician, who hopes to one day move to San Francisco, as stated by Reality Steve. Reality Steve has also reported that Vandevanter, “had a friend who died in the Marines that might be part of his story. Trained for 6 months to have one professional boxing fight to honor his friend. Also ran the Marine Corps Marathon in DC to honor him as well.” According to Vandevanter’s Instagram profile, he is an amateur boxer and trainer, whose nickname is “Pick”. Find one of his boxing matches on YouTube here.

Clay Harbor will celebrate his 31st birthday while filming, according to Reality Steve. Harbor is an NFL free agent tight end, who has played for the Eagles, Jacksonville, Patriots and Lions. Most recently, Harbor was on the Injured Reserve with the New Orleans Saints. Reality Steve has reported that Harbor was actually recruited to be a contestant on The Bachelorette 2018. Harbor currently lives in Chicago, Illinois.

Rickey Jasper is an online personal trainer for www.413healthandfitness.com and he is a bodybuilder. According to his Facebook profile, Jasper is also the CEO at 4:13 Apparel. When it comes to his personal life, Jasper is close with his mama. In January 2018, he wished her a “happy birthday” on Facebook, writing, “You’re the best mother a son could ever ask for. You consistently put family before yourself, love effortlessly, and are the perfect example of a woman. I wish I could be there to celebrate with you but I know the rest of the fam will eat enough for me!”

David Ravitz is reportedly a contestant this season on the show and Reality Steve reports that he comes from a successful family. Ravitz’s parents own Ravitz Family Markets, which actually owns 5 ShopRite grocery stores in the state of New Jersey. Most of Ravitz’s social media accounts are set to private, which is normal for contestants, since ABC tries to keep info on the cast members under wraps, prior to premiere night. Ravitz is originally from Cherry Hill, New Jersey, but currently lives in Colorado.

The Bachelorette premieres after Dancing With the Stars comes to an end. DWTS premieres on April 30, 2018 in a shortened season, while The Bachelorette is set to start airing on Monday, May 28, 2018 at 8 p.m. ET/PT on the ABC channel. 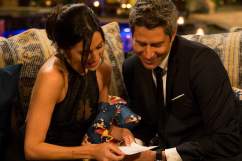