On tonight’s episode of The Bachelor 2018 After the Final Rose special, the identity of the next Bachelorette star will be revealed, but we have the details on the reported new Bachelorette right here. We will also be updating this post live during the ATFR special for all the most accurate information on the big news. For those who do NOT want to know any spoilers on the cast of The Bachelorette 2018, STOP READING NOW.

According to blogger Reality Steve, the new Bachelorette leading lady is broken-hearted Becca Kufrin and it was confirmed ATFR tonight. This could be the happy ending Kufrin has wished for … After Luyendyk broke up with her on the finale last night, Kufrin was heard saying that she felt like her future had just been ripped away from her. Reality Steve has stated that, “For those that still might be in the dark of what happens tonight in regards to the Bachelorette announcement – it’s Becca. C’mon. You think after all that last night, and you think after all this coming tonight Chris Harrison is gonna say, ‘And our next Bachelorette … Tia!’ Or Kendall. Or Bekah M. C’mon … She will be announced on the episode tonight and there’s not gonna be any last second change up. Filming starts next week.” This could definitely make for high ratings, with all of Bachelor Nation in her corner, now that they’ve seen her brutal break up footage after being dumped just weeks after her proposal with Luyendyk.

Kufrin was completely blindsided by the rejection, telling People that, “I thought we were just going to have a nice romantic weekend. The night before he had turned off his phone, which I thought was strange, and it wasn’t until the moment when he walked into the house when he didn’t have his suitcases with him, I was like What’s going on?” On the finale, Kufrin was clearly devastated and she told show host Chris Harrison that Luyendyk’s actions were unforgivable. During the real-time break up footage, several times, Kufrin said out loud how much she was embarrassed. She also admitted to People, “It was embarrassing the way he broke up with me with the full cameras and crew around … A breakup is hard enough, and to have it all filmed and have to re-watch it and know that people all across the country are watching you get your heart broken, it is embarrassing. It’s not fun. I wouldn’t wish it on my worst enemy. It was like a slap in the face.” All in all, Kufrin said that she wishes Luyendyk had been more honest with her. She also felt that he could have gone about the break up in a “more tactful” way.

Generally, The Bachelorette airs in May, after the conclusion of Dancing With the Stars and this year it will premiere on May 28, 2018. Reality Steve has reported that next week, he will start revealing some of the men who will be competing for Kufrin’s heart on the show. And, on tonight’s ATFR show, Kufrin gets to meet a few of the men. Contestant number one comes out and he had an accent. He has the entire audience cheer to congratulate Kufrin on her new gig as The Bachelorette and says she handled her rejection very well on The Bachelor finale. He also says that at the end of the night is his birthday. He appears very sweet, but his name is not said.

The next candidate introduces himself as Chase Ferguson. He comes off a bit nervous and tells Kufrin that she deserves better than Luyendyk. He also is a bit goofy, which is refreshing.

Next, a man comes out singing and playing a banjo. In a patterned blazer, he serenades Kufrin, telling her he’s one of a kind. Their exchange is a bit awkward, but Kufrin seems impressed by him. The next man is named Darius and he has a bit more swagger. He comes out and immediately calls Kufrin gorgeous. He also formally apologizes on behalf of his gender because of Luyendyk’s actions. After Darius, a man with a horse appears and he introduces himself as Blake. His horse is named Bradley. When speaking with Kufrin, he commends her for being brave. The reason for the horse is because when you fall off a horse, you have to get back up again. 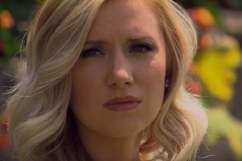 Arie Luyendyk Gets Engaged to Lauren B on ATFR