Gone are the days of Angelina Jolie donning the ponytail, camouflage shorts, black boots, and dual pistols Lara Croft is known for. This rebooted rendition of a classic video game franchise in big screen adaptation form features a new lead – Alicia Vikander. Tomb Raider presents her origin story in the same manner as Square Enix and Crystal Dynamics’ 2013 entry in the long-running series. It sticks to many of the familiar notes seen and played in that title, while also deviating from that game’s story threads and adopting some original takes on the formula. Tomb Raider surprisingly stands far and above the garbage pile of bad video game movies thanks to a fine performance from the new and improved Miss Croft.

If you’ve spent an extensive amount of time with the 2013 reboot of Tomb Raider, you’ll easily spot many of the nods to it in the movie. Before we get to see Lara embark on her first perilous journey, we get a glimpse at her non-tomb raiding origins. She’s a scrappy, independent, and courageous young woman who chooses to support herself instead of relying on the Croft Family inheritance. But after a run-in with the authorities, she’s forced to confront the realities of her father’s disappearance and the importance of having the Croft company’s ownership put in her name. Lara’s search for answers leads her directly to her father’s secret room filled with research material about a mythical ancient being. This is where audiences who’ve remembered the plot from the 2013 reboot will easily figure out what’s coming next. This early setup for the film is certainly intriguing and does a good job of establishing the more sinister machinations connected to Lara’s father going missing.

Following that sequence of events, Lara embarks on an international adventure that leads her to a drunken sea captain (Daniel Wu). After explaining her desire to reach an uncharted island destination to Lu Ren, Lara is set on a path to confront the mystery of Himiko. The middle portion of the film includes a host of instances that are ripped directly from the 2013 game. Luckily, they’re lovingly recreated for the big screen and it’s cool to see how Alicia Vikander handles each harrowing situation. When Lara and Ren make landfall, they fall into the grasps of Mathias Vogel (Walton Goggins). He’s made out to be the main villain due to his connection to a shadowy organization that seeks to unlock the supposed paranormal powers of Himiko. Vogel plays the part of the creepy, domineering baddie perfectly here and gives Lara enough reasons to stop him.

The film’s final sequence of events on the island play out like a greatest hits of Lara’s 2013 video game excursion. She quickly becomes adept at utilizing her signature tools, takes giant leaps of faith, fights for her life against much larger foes, and puts her puzzle solving skills to the test. To see her transition from from a somewhat weak character to a badass heroine with Rambo-like qualities so quickly is a bit jarring, however. The same can be said about the once drunken sailor, who’s suddenly established as someone who can properly use a machine gun and save hostages without much of an issue. It would have been nice to see a more gradual buildup to their stronger selves. And while a lot of the more action-packed scenes are fun, subpar visual effects kind of took me out of the moment. Once Lara’s island campaign comes to a close though, I found myself pleasantly surprised. Tomb Raider sticks to everything that worked in video game form, changed up a few areas, and came out with a simple yet enjoyable action movie.

The 2018 film reboot of Tomb Raider may not be as amazing as the 2013 video game reboot. But it still offers up a shockingly decent adventure romp that fans and non-fans will get a kick out of. The new Lara Croft plays her part perfectly by embracing her faults and hidden strengths during a harrowing mission. This origin story may have a few issues that keep it from being much more than just a good video game movie. But it stands apart from the sub-genre’s glut of garbage material by sticking to what worked on the small screen and adapting it for the big screen. 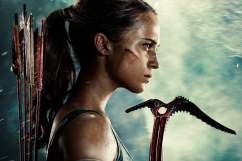 Tomb Raider 2018: Is There an End Credits Scene?