If you’re watching Season 2 of Jessica Jones, you might be wondering where the season is filmed. We have the scoop for you. Jessica Jones takes place in the Hell’s Kitchen neighborhood of New York City, just like Luke Cage, Daredevil, and Iron Fist. Jessica Jones Season 2 was filmed in areas throughout New York City. This post will have minor spoilers.

Hell’s Kitchen is a real place, located on the west part of Midtown Manhattan. Areas that still have an old Hell’s Kitchen feel are often chosen for scenes in Season 2, including parts of Brooklyn and Queens. Luke Cage’s bar, for example, is filmed in East Village at a real bar called the Horseshoe Bar. Judy Rhee, production designer, told Express that filming in New York gives the series a more authentic feeling. The filming schedule for Season 2 was pretty intense for Krysten Ritter, who stars as Jessica Jones. That’s because season 2 was filmed right after The Defenders was filmed.

Filming began the first week of April 2017 in New York City and wrapped up mid-September 2017.

Remember those scenes at the aquarium? Those were filmed at the Long Island Aquarium and Exhibition Center in Riverhead. Riverhead Town let ABC Studios, Marvel Television, and Tall Girls Production to use municipal parking the day of the shooting, and a representative from the aquarium confirmed that they were indeed used for the show.

Here are some more locations for Season 2, as shared by On Location Vacations:

Here are some tweets that were shared during the filming (which was codenamed “Violet”):

@olv Signs for "ABC's Violet" (aka Jessica Jones?) all along Queens Boulevard btw 45-47th Street in Sunnyside for tomorrow 11 to 6.

Here’s a photo from Greenpoint when Kilgrave appeared. This is a great catch:

And here are some more tweets and photos:

Seen this on my block @olv pic.twitter.com/SPsEzylYQX

@olv Violet, aka Jessica Jones, will be filming in Hell's Kitchen (45th, between 9th & 10th) on Thursday. Can't wait for season 2! ? pic.twitter.com/pv9FOjomtT

And by the way, filming wasn’t always easy. Krysten Ritter talked about biting through her tongue during one scene, and how someone accidentally knocked her out.

Someone accidentally knocked out Krysten Ritter while filming the new season of Jessica Jones: https://t.co/U2HvCWq7OV pic.twitter.com/d2HAlCtqBR

Yes, she was punched in the face so hard that she passed out and almost bit straight through her tongue during the filming for Season 2, io9 reported. She said she panicked about the blood, the crew teased her, and then she had to get right back to work. So if you think filming is all glamorous, definitely think again. 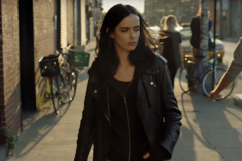