The 2018 Academy of Country Music Awards, more commonly known as the ACM Awards, airs from Las Vegas, Nevada. It is one of the biggest events in country music, celebrating and honoring achievements in the entertainment industry over the past year. Get to know about who is hosting, what channel to watch the show on, the performers and every other detail about the show below.

TV CHANNEL: The awards show airs on the CBS network. Check with your local TV provider (Verizon FIOS, Optimum, etc.) for the exact channel number. You can also click here to check out all CBS affiliate stations in various locations.

HOST: Reba McEntire will take the stage for her 15th time as the show’s host. For several recent years, Blake Shelton and Luke Bryan hosted the event, and last year, Bryan teamed up with Dierks Bentley. McEntire has now returned and she told Us Weekly that, “Since I had turned that duty over to Blake [Shelton] and Luke [Bryan] and then Luke and Dierks [Bentley], they just came back around and asked if I would be interested. I said, ‘Sure!’ I miss it. When you’re sitting at the awards show and you’re out in the audience, once you’ve gotten the honors of hosting, you’re sitting there kind of wondering what’s going on backstage and you miss being a part of that excitement.” This will be McEntire’s first time back as host since 2012.

FREE LIVE STREAM: There are multiple ways to watch the show online via live stream, some of which are free. If you have Amazon Prime or want to start a free 30-day trial of Amazon Prime, you can watch a live stream of CBS and on-demand content via the CBS All-Access Amazon Channel, which comes with a 7-day free trial. You can also sign up for a free 7-day trial for CBS All-Access, and then you can watch the show on your computer via the CBS website, or on your phone, tablet or streaming device via the CBS app. Find all of the available live stream options for the 2018 ACM Awards here.

GettyRecording artist Jason Aldean accepts the Entertainer of the Year award during the 52nd Academy of Country Music Awards at T-Mobile Arena on April 2, 2017 in Las Vegas, Nevada.

For Album of the Year, those in the running include Little Big Town for “Breaker”, Jon Pardi for “California Sunrise”, Chris Stapleton for “From a Room: Volume 1”, Old Dominion for “Happy Endings,” and Thomas Rhett for “Life Changes”. The Best Single Record of the Year honorees are Little Big Town’s “Better Man”, Sam Hunt’s “Body Like a Back Road”, Chris Stapleton’s “Broken Halos”, Midland’s “Drinkin’ Problem” and Blake Shelton’s “I’ll Name the Dogs”. Those up for Song of the Year this year are the songs “Body Like a Back Road”, “Female”, “Tin Man”, and “Whiskey and You”. And, the songs nominated for Video of the Year are for “Black” by Dierks Bentley, “It Ain’t My Fault” by Brothers Osborne, “Legends” by Kelsea Ballerini, “Marry Me” by Thomas Rhett, and “We Should Be Friends” by Miranda Lambert. 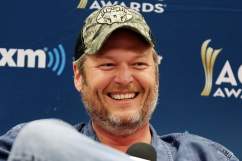